Dominic Lau always wanted to do what mattered most, and as a young boy, that meant being a firefighter or a pilot.

“I wanted to become a fireman because I genuinely love that when everyone’s running out of a building on fire, the [firefighters are] running in. They’re modern-day heroes,” the Hong Kong native explains.

“And pilots, they have the coolest jobs in the world. They get to fly multi-million dollar airplanes at 500 miles an hour. When you’re a pilot, the way you fly, the smooth touchdown, making sure the plane is stable, it matters to that one person that you’re doing your job as best as you can.”

Fast forward years later, and Lau does not find himself inside a burning building or in a cockpit of an airplane. Instead, he stands in the center of the Circle with a microphone as ONE Championship’s ring announcer.

Very happy to have been able to visit Tokyo during the gorgeous cherry blossom season. I didn’t know until recently that the Sakura season is relatively short. Full bloom is usually reached within about one week after the opening of the first blossoms then a week later, they begin to fall from their trees. Just TWO weeks to catch these flowers in bloom! Grateful to have been afforded the time to be able to experience the Japanese capital at its finest. You rock Tokyo!!! ????????????????????????❤️ . . #tokyo #japan #japanese #sakura #cherryblossom #domjlau #domlau #instadaily #nature #beautiful #photography #travel #wanderlust #instagood #lifewelltravelled #perfectingthejourney #traveler #traveller #work #grateful #instalike #love #tourist #walk #sightseeing #happy #fitness #blossom #fitfam #peace

Although ring announcing may not sound as dangerous as fighting fires, it does have its challenges.

“Once the cameras are on, we’re going live around the world. You got the fans screaming inside the arena. You got these two warriors on either side of you, and it’s a rush,” the 38-year-old says.

Lau, however, is not new to the craft of using his voice to grab the attention of fans. He got his start as a video jockey, and he was regularly featured on E! News Asia and Channel [V] Asia. Most recently, he hosted Asian Pop 40 for the past six years.

The Hong Kong resident had a blossoming career in television and radio, but he never expected to one day become a ring announcer in The Home Of Martial Arts.

“At no point did I think I was going to be donning a suit and belting out the names of some of the strongest, toughest athletes on the planet,” he confesses.

It’s not often I have to wear suits but sporting this midnight blue velvet number was definitely worth the wait!! Something happens when I don this suit; I stand taller, prouder and feel like nothing can stop me from taking on the world! And that is exactly how I felt when I decided to sport it during @onechampionship’s recent event in Tokyo. Minutes before entering the arena I was completely focused, prepared and ready to rock! And boy did it!!! ???????????????????????? . . #suit #fashion #onechampionship #weareone #style #tailoredsuit #domjlau #domlau #instafashion #fashionista #proud #tokyo #me #pride #streetstyle #mensfashion #instagood #stylish #suits #sexy #instapic #wanderlust #travel #workout #instadaily #hkig #weekend #vintage #tuxedo #instastyle

That, however, is exactly what Lau is now known for. It is a career he attributes in a small way to legendary wrestling announcer Howard Finkel.

As a 9-year-old child, Lau used to watch the short, balding man with a thick mustache in a black suit and bow tie bellow out the names of some his favorite wrestlers like Hulk Hogan and Andre the Giant.

“I just loved his voice,” the ONE ring announcer says. “As soon as he got in the ring, his baritone voice echoed around the arena. That booming voice got everyone’s attention.”

Finkel did not reinvent the wheel, but what made him stand out was the simple emphasis he placed on the word “new” when announcing a wrestler who had just won a World Title.

Similarly, Lau has become known for his tagline, “Here we go!” The catchphrase came naturally while opening a ONE event a few years ago, and it has stuck ever since.

It’s all smiles here from the collective voice of @onechampionship as we get set for another thrilling night of martial arts action, this time in Manila, Philippines. Last week, we kicked off the new year with an amazing card in Jakarta, Indonesia. This week we’re keeping the momentum going with another stacked card tonight and it is going to be fireworks! But I post this photo in tribute to my colleagues… There are of course plenty of promotions out there each of whom have their own commentators, announcers and emcees. But I truly believe that ONE have the best in the business. We come from different countries, cultures and backgrounds but we share a common ground here at One Championship. So to “The Voice” @schiavellovoice, “Dragon” @mitchchilson and “MC” @norachomp I say this… It is an honour and a privilege to share the mic with you. To the countless cities we travel to together, to the endless action we witness together, to the unrivaled, professional camaraderie we share together, I look forward to making history with you this year! Here’s to an epic 2019! WE ARE ONE!!!! ☝???????????? . . #weareone #onechampionship #one #mma #martialarts #mixedmartialarts #domjlau #domlau #instagood #asia #australia #thailand #hongkong #philippines #instafit #work #passion #newyear #manila #2019 #travel #jakarta #indonesia #voice #happy #friends #inspiration #muaythai #kickboxing #instadaily

With that line, he draws fans into what he describes as “the legendary world of heroes.”

“The fans are my first priority. I’m keeping the excitement alive, but I always want to make sure there’s that connection when I announce,” he says.

“From a fan’s perspective, you see these two athletes about to go at it, and it’s almost mythical. When I come in, I bring the human element back to it.”

Though Lau never realized his childhood dreams of becoming a firefighter or a pilot, he still feels ring announcing is important.

“What you’re doing matters to that one person,” he says. “Even if only one person out of a thousand is paying attention to you, you have to do your job as if they are all listening.”

It seems the fans are listening, and more than just a few. 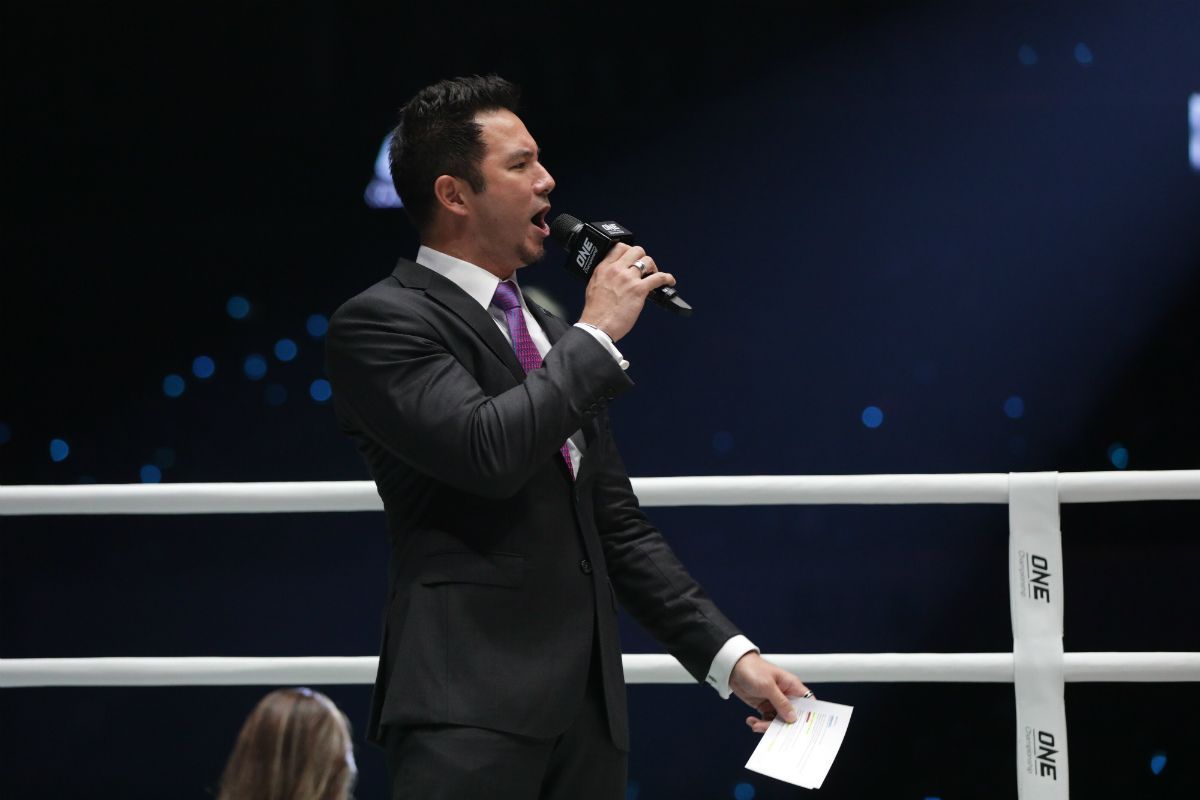 One evening in Manilla, Philippines, after the lights had dimmed over the ONE Circle, the music faded, and the fates of the athletes had already been written, Lau was standing outside the Mall Of Asia Arena.

He was boarding a bus, and as soon as he stepped on the vehicle’s platform, he heard some fans in the distance chanting, “Here we go!”

That brought a smile to the ring announcer’s face.

“Those moments are memorable,” Lau states. “It’s very humbling. It instills the feeling that what I am doing matters.”

Fans can hear Lau say those words once again when ONE Championship heads to Ho Chi Minh City for its inaugural Vietnam event, ONE: IMMORTAL TRIUMPH, on Friday, 6 September.