Judd Reid is one of an elite few karate masters who have successfully conquered the rarely-staged 100-man kumite. It is widely considered the ultimate martial arts test, where a challenger engages in a hundred consecutive two-minute fights against black-belt opponents.

Through his martial arts journey from being a skinny Melbourne kid all the way to becoming a world champion who conquered the 100-man kumite, Reid has made it his personal mission to motivate people to pick up martial arts, and inspire a similar sense of determination and self-confidence. 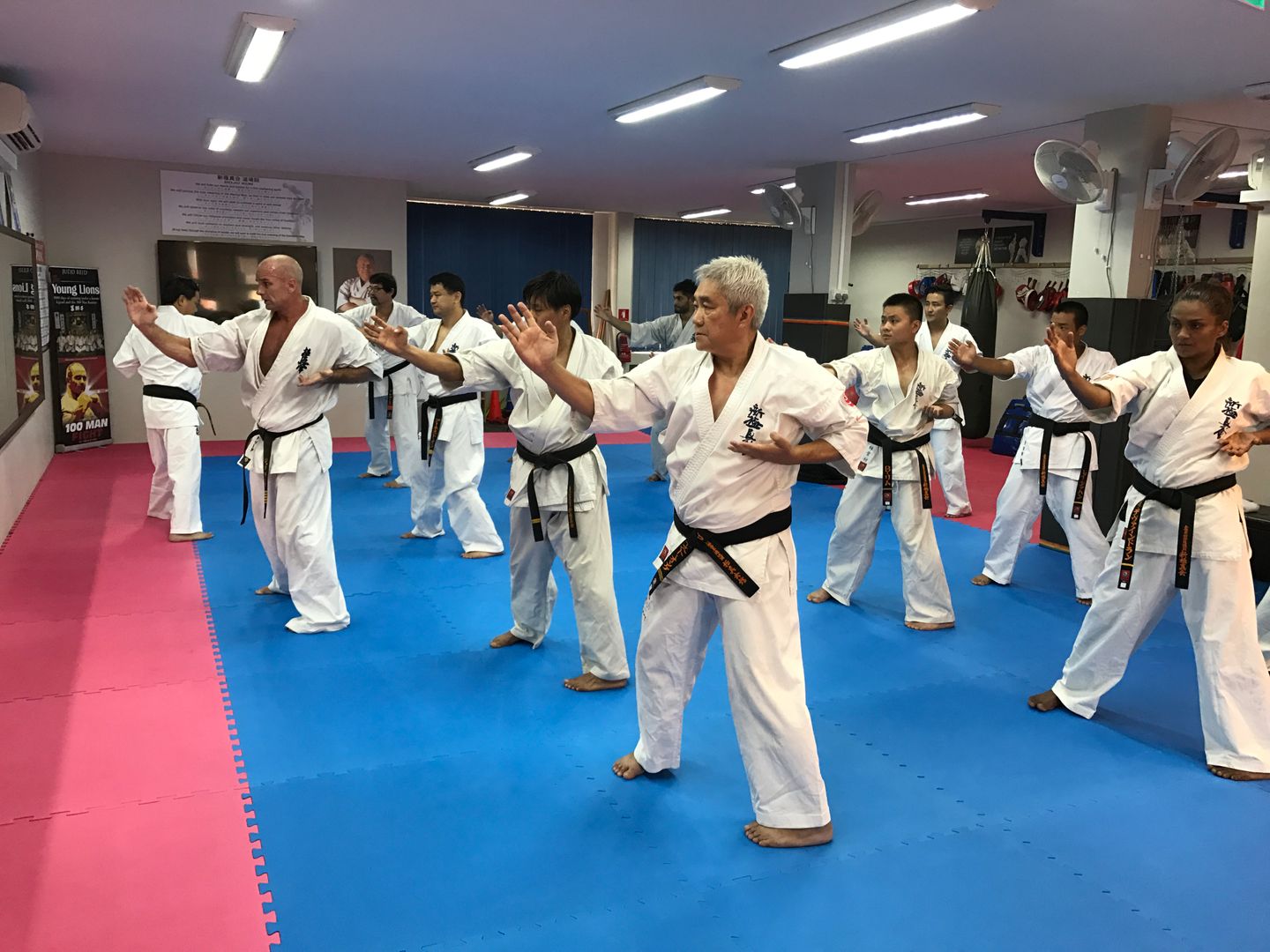 More than five years removed from the life-altering experience, the Australian Kyokushin fifth-degree black belt stood inside Singapore’s Core Dojo. On that sunny afternoon, he took a quick recess from conducting a karate seminar for this exclusive interview with onefc.com, and recalled competing in the landmark event.

Reid breathes deeply. “[The 100-man kumite] is something you can never prepare for,” the 46-year-old says. “I dug deep and I drew on all my previous experiences in life, especially from my time in Japan. I drew from my persevering, never-give-up spirit. I believe, and I feel, what got me across the line was drawing on those experiences.”

Those experiences began in Melbourne, Australia. Reid was a skinny boy who played soccer and often engaged in schoolyard fights with bigger kids. By his own admission, he had a lot of fire in him, was always getting in trouble, and lacked self-confidence. However, when the self-proclaimed Bruce Lee fanatic started practicing karate when he was 12 years of age, and found the training yielding immediate results. He felt an instant connection to Kyokushin karate, and bonded with it instantly. Reid enjoyed all aspects of the martial art, particularly the intensity of the training, the hardship,  discipline, and sweat it involved. Most of all, he respected the strictness of his teachers in ensuring everything was done at 100 per cent.

“I liked the philosophy of karate. It is something that you wouldn’t forget about after you finished training and would bring home with you,” he says passionately. “With karate and martial arts, you carry those philosophies on with you throughout your life. It teaches you a way of life. In some ways, it teaches you how to behave.”

In fact, the person happiest with Reid’s training was his mother. She was overjoyed at how her son had changed. Suddenly, he had much-improved-concentration and discipline, which resulted in better results in school. Through karate, everything in Reid’s life was experiencing an immensely positive effect.

That was also the point where a dream was born. Reid made it his life’s ambition to study directly under Sosai Mas Oyama, the legendary teacher who founded the full-contact discipline of Kyokushin karate. 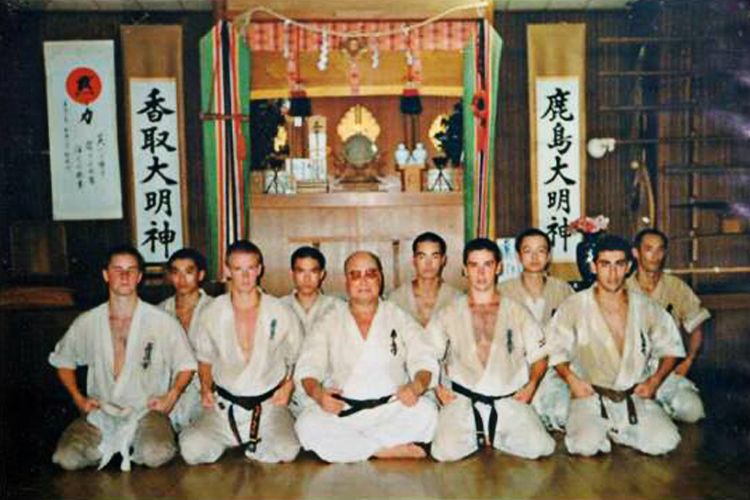 In 1990, following a recommendation from his karate instructor in Australia, that dream turned into a reality. He departed for Japan to live and train under his hero, Oyama, for 1000 days as part of the legend’s “uchi deshi” live-in training program.

“I used to write in a diary as a young kid, ‘I will go to Japan one day, and live and train under Sosai Mas Oyama.’ I believed in that, and I made it happen,” recalls Reid. “That changed my life. I went to Japan at 19 years of age and trained under the master. I guess after living in Japan, I was never going to live a normal life, like a nine-to-five. I was just living the karate dream: eating, sleeping, and dreaming of doing karate.”

For the next three years, the skinny Aussie underwent intense training and barely had any contact with his family. At times, he was physically and mentally broken, but the legendary Oyama took it upon himself to rebuild all of his students through this process, almost re-constructing them. He also found that his hero was everything he had imagined him to be.

“He (Oyama) was an absolutely amazing person. I feel sometimes that words cannot describe him the way he deserves, because he is an incredibly humble, caring person, and all he wants to do is get the best out of you. He always wants to inspire you to do well for yourself, and for you to succeed. That is what he was about — building your character and giving you confidence,” Reid recalls of his days under Oyama’s guidance.

“Sometimes, he was very harsh on you. If you were not training hard and he saw you were stuck, he would come down on you, like, ‘Hey, you fool! You must straighten yourself up and train better!’ At the same time, if you were doing something right, he would say, ‘Well done. That is what I want to see. One day, you are going to be a world champion.’” 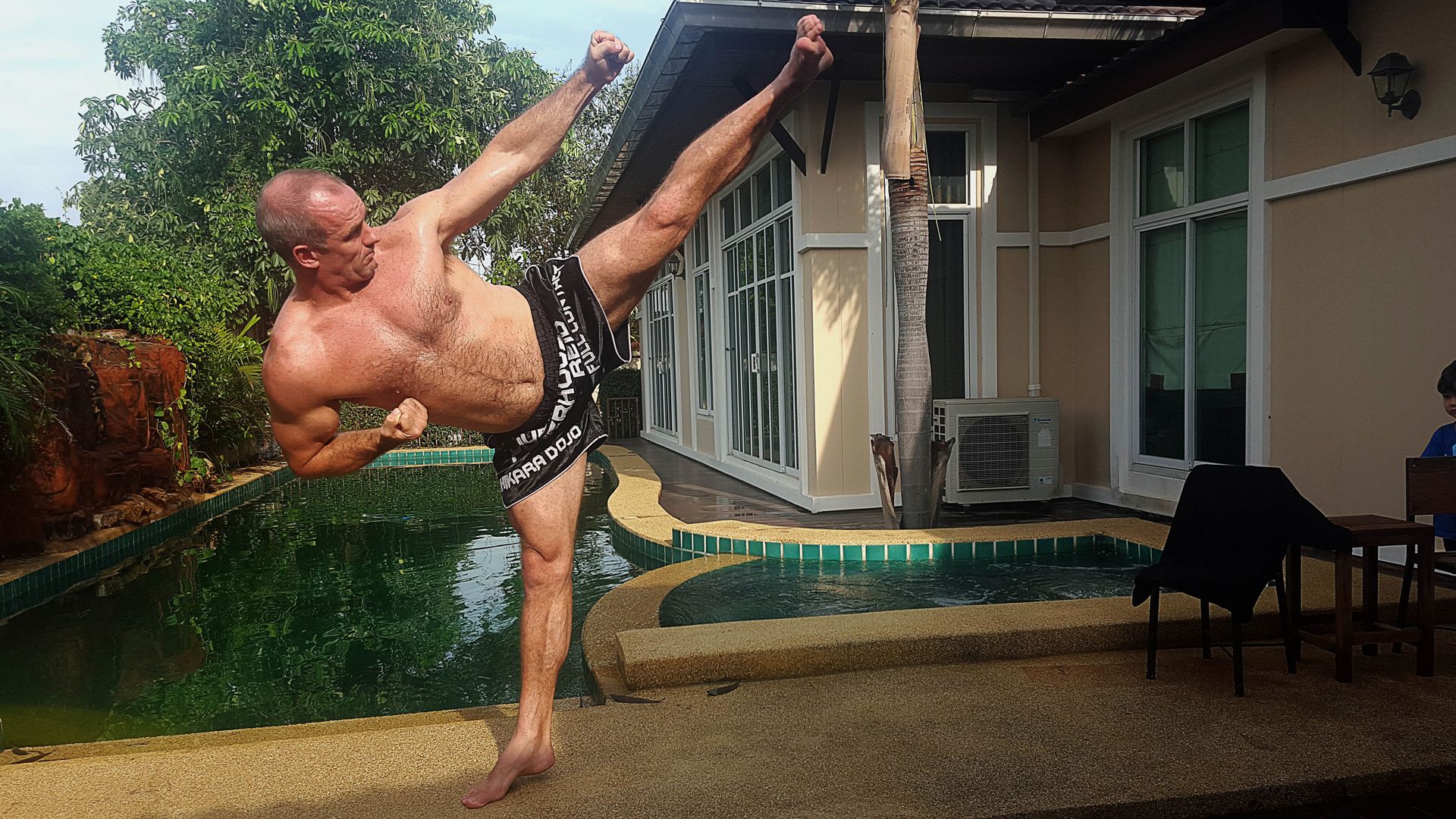 Reid, who transformed into a 93kg hulk, became the first non-Japanese to graduate from the program. His friend and former K-1 competitor, Nicholas Pettas, became the second and the last, as Oyama passed away in 1994. However, before the Melbourne native ventured off into the world, the legendary teacher requested two things from his pupil: to become a world champion and to complete the 100-man kumite.

It took Reid two decades before he fulfilled the first request. He competed in many tournaments, placing second and third multiple times before finally winning the WKO World Heavyweight Championship in 2010.

As far as completing the 100-man kumite, however, he initially had no desire to fulfill that request. Reid had full knowledge of the rigors involved in such an extreme test, and had witnessed firsthand competitors tearing their muscles in mid-attempt. He even participated as a combatant in Akira Masuda’s attempt 20 years earlier, and saw Masuda in agonizing pain. It was not something he was eager to put himself through.

However, after constant calls from his friends and family, the Australian finally relented. He decided to honor his legendary master’s memory, and in appreciation of all the people who had supported him over his storied career. To get himself ready, Reid spent four months getting into peak physical condition so he could withstand the ultimate martial arts test known to humankind. It would still not prove to be enough. 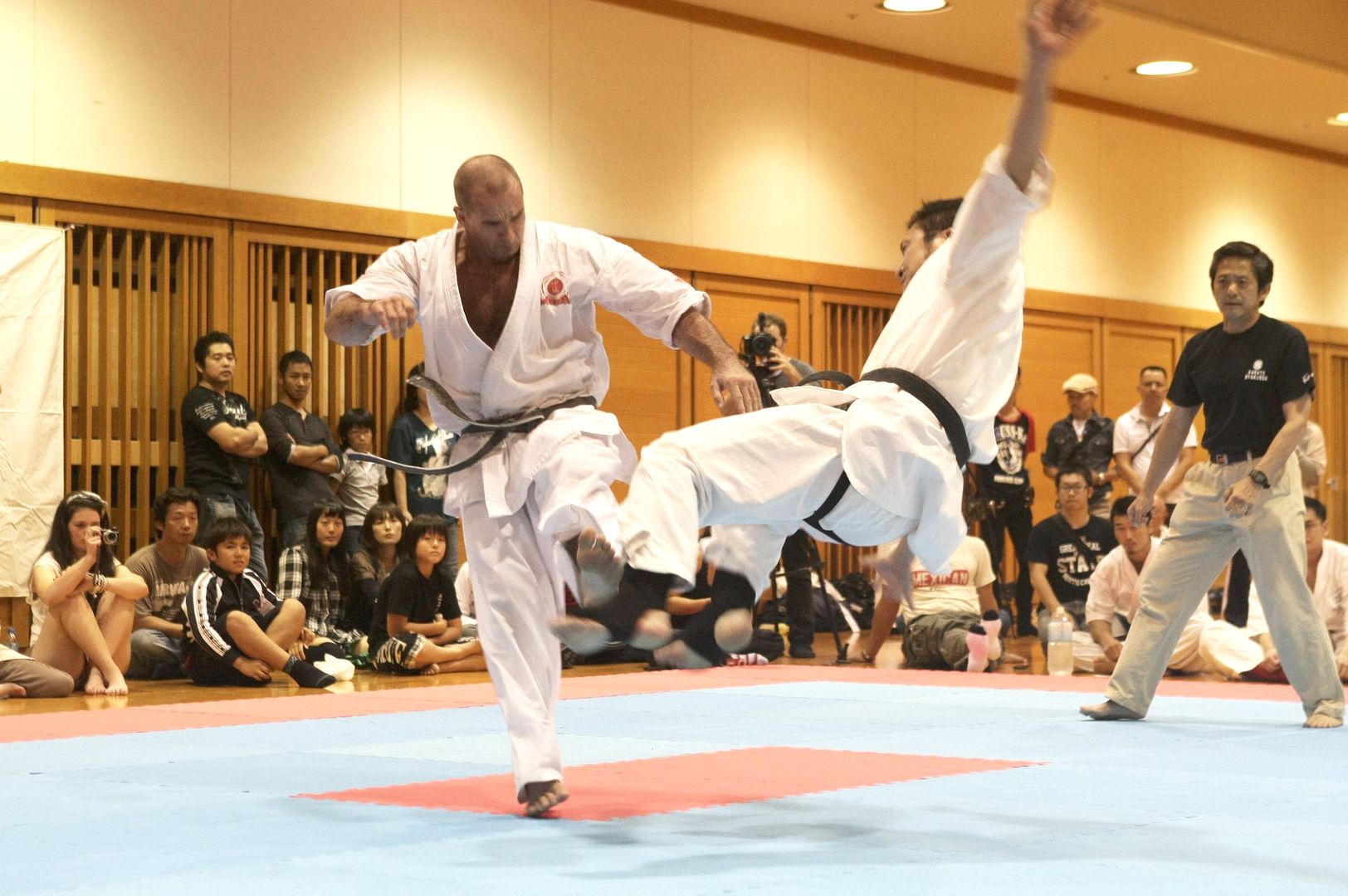 In October 2011, with cameras rolling, Reid was ready for his 100-man kumite. It consisted of fighting a hundred men, consecutively one after another, for anywhere from 90 seconds to two minutes. It was a daunting task, to say the least. At first, he tore through the first half of the challenge without any issues, but soon, as expected, fatigue set in.

“The last 40 fights were going to be the most horrible feeling of pain I was going to experience in my whole life,” he recalls. “Around fight number 60, I felt a weight on my shoulders. It felt like a 200 kilogram log on my shoulders, and I felt my power leaving. It went from 100 per cent to almost feeling like 10 or 20 per cent. I lost my concentration, my power was gone, I felt lonely, and almost defenseless.”

Reid’s legs were cramping, he was dehydrated, and he was sweating profusely. His body felt like it was on the verge of collapse, but despite all of that, he was determined to finish.

“That’s when i got into my mindset,” said Reid. “I told myself ‘Judd, you have to snap out of this very quick, you have 40 more fights to go.’ I had to dig deep into my spirit, and really rely on all my preparations — including 20 years of training in Japan and all around the world — gathered all that strength, and used it to get across the line for the next 40 fights.” 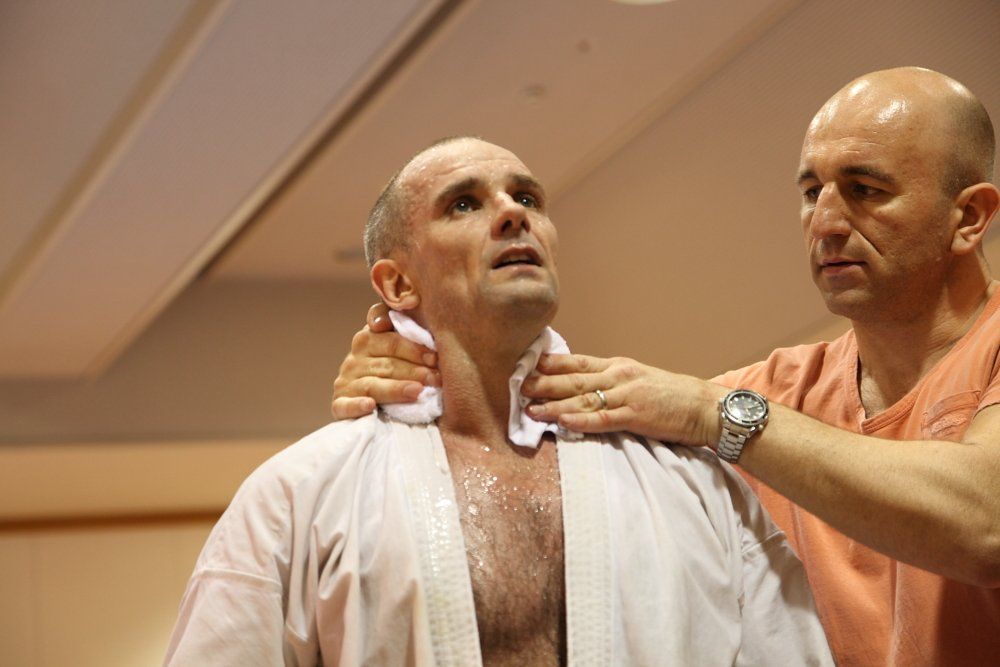 “I never felt like giving up. My mindset was always, ‘I am going to complete this, no matter what,’” he says, as determined as he was five years earlier. “The human spirit can overcome a lot of difficulties. You can do anything you want if you put your mind to it.”

After three and a half hours of pain and suffering, he became the 20th person in history to complete the 100-man kumite. It is an incredible accomplishment that he holds as one of the proudest moments of his life.

Upon such a milestone achievement, he could have very easily called it quits and retired to simply teach karate in a dojo. However, that was not Reid’s way. He recalled all that he had learnt from, sacrificed, and gone through in his life for karate, and knew it would be a waste if he were not to do anything with it.

In fact, he felt he had a certain responsibility to carry on his master’s enduring legacy, to teach for him, and to instruct others in his ways. It is something that still motivates him to this day, more than 20 years later.

With his legendary instructor’s second and final request fulfilled after completing the 100-man kumite, the Aussie now spends his time promoting the documentary Journey To The 100 Man Fight: The Judd Reid Story and his book The Young Lions. He also actively spreads the teachings of Oyama through seminars like the one in Singapore, and conducting karate camps in Pattaya, Thailand.

“My hope is to spread a message of chasing your dream and to not give up on what you believe in,” says Reid. “Anything is possible. If you want something bad enough in life and you commit yourself to it, it can be done. Through martial arts, not matter what it is — if you want to study at a certain school or want a better job — if you want it bad enough, you can make it happen, and always believe in yourself that you can do it.” Reid’s extraordinary journey is compounded by the fact that he could have led a much more comfortable life if he hadn’t decided to dedicate himself to karate.

By the time he was 14, Reid was already an incredibly promising golfer with a handicap of 14, with the real possibility of turning professional. In addition, he also could have become a stock broker on the Melbourne stock market after working there for a year. However, none of that was part of a life Reid wanted to lead.

“I have no regrets,” he says with conviction. “With my martial arts, I have been able to travel all around the world. I’ve met different people, developed close friendships and bonds, and for me, there is nothing better than that.”

For more information on his book, DVD, and training camp, please visit www.juddreid.com.