The 29-year-old Filipino has always possessed athletic talent, which has contributed to his many successes, but his insatiable appetite for knowledge and constant desire for self-improvement have allowed him to unlock his true greatness.

Eustaquio’s parents did not initially support their son’s martial arts pursuits when he was a teenager, but they always encouraged him to get a college degree, which he did through wushu scholarships at the University Of The Cordilleras.

Who gives Geje "Gravity" Eustaquio the fuel to go the extra mile?

Who gives Geje "Gravity" Eustaquio the fuel to go the extra mile?Macau | 23 June | LIVE and FREE on the ONE Super App: http://bit.ly/ONESuperApp | TV: Check local listings for global broadcast

Posted by ONE Championship on Tuesday, June 5, 2018

In fact, he got two degrees – he earned his Bachelor of Secondary Education in 2009, and later received his Master of Arts in Physical Education in 2016.

Though he makes his living as a full-time professional mixed martial artist, Eustaquio maintains that education is an integral part of an individual’s development.

“Education is about learning and growing. It is about self-improvement – not just in the physical capacity, but also the mental and spiritual kind,” the soft-spoken World Champion explains.

“Our culture treats education as a passport to a high-paying job. Ever since we were young, we were taught that we had to study hard in school in order to get into a good company.

“For me, education is more than that. It is a pathway to becoming a better person.”

Will Geje "Gravity" Eustaquio's extraordinary striking be his key to becoming the undisputed ONE Flyweight World Champion?

Will Geje "Gravity" Eustaquio's extraordinary striking be his key to becoming the undisputed ONE Flyweight World Champion?Macau | 23 June | LIVE and FREE on the ONE Super App: http://bit.ly/ONESuperApp | TV: Check local listings for global broadcast

Posted by ONE Championship on Monday, June 4, 2018

That passion for learning, growing, and improving has been essential to Eustaquio’s mixed martial arts career, too.

He has spent the past seven years cultivating his talent inside the walls of Team Lakay in Baguio City, Philippines. He has learned by testing his skills in the cage, and, alongside his head coach Mark Sangiao, regularly evaluating how he can become better in his craft.

“I am a person who loves to compete, and then I like to reflect on my development afterwards,” Eustaquio says.

“I can still remember my first ONE Championship event in 2012, and I compare it to my performances today. I have come so far, and my skills have evolved tremendously over the years. It is knowing that I have improved so much that makes me really happy.”

“Gravity” has matured from bout to bout, and built upon his wushu pedigree by incorporating elements of wrestling and submission grappling into his overall game.

Estaquio has become a complete mixed martial artist. Proof that his abilities have reached an elite level came in January, when he defeated Kairat “The Kazakh” Akhmetov in front of a home crowd in Manila via unanimous decision to claim the ONE Interim Flyweight World Championship. 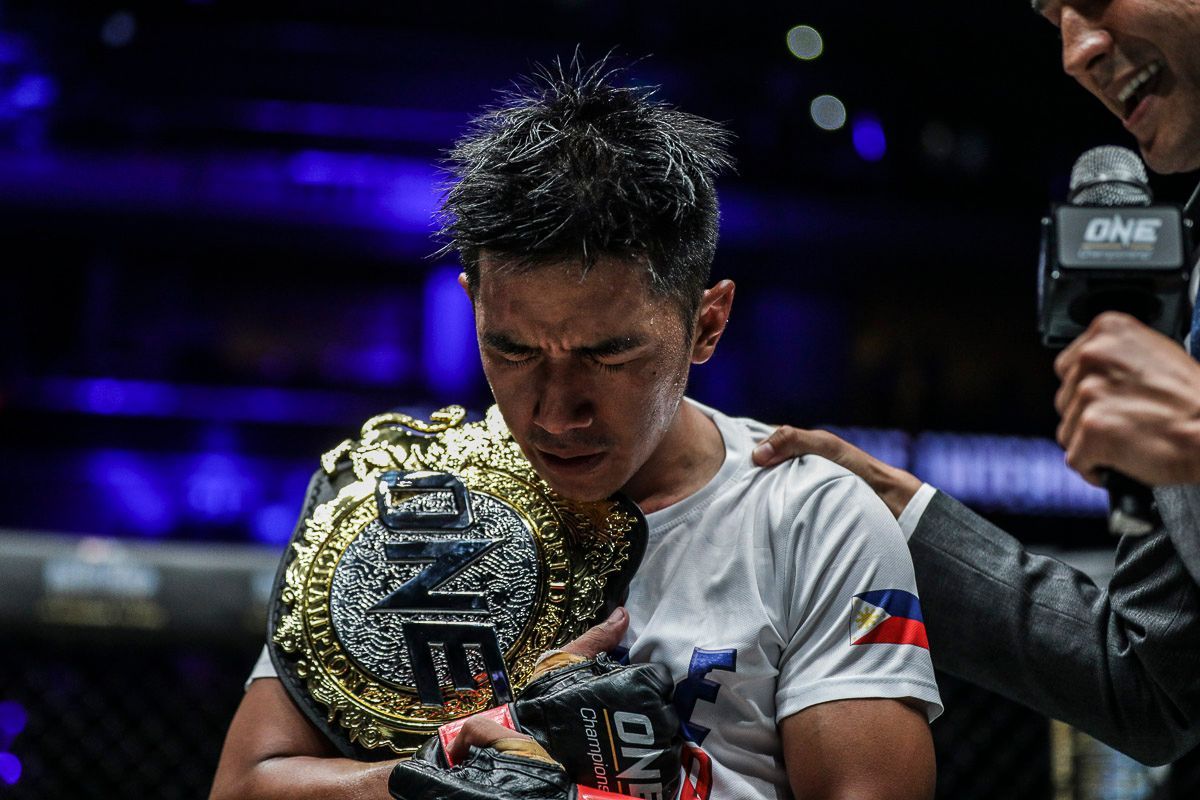 The best, however, could be yet to come on Saturday, 23 June.

Eustaquio will face ONE Flyweight World Champion Adriano “Mikinho” Moraes in a world-title unification bout at ONE: PINNACLE OF POWER, set for the Studio City Event Center in Macau.

This will be a rematch of their first encounter for the inaugural ONE Flyweight World Title in September 2014, which Moraes won via guillotine choke in the second round.

Even though the Filipino lost that contest, it helped transform him into the athlete he is today. He recognized his vulnerability on the ground, and devoted countless hours over the next few years turning his weakness into a strength.

“I am a much different fighter now. I have changed a lot,” Eustaquio says.

“As long as I am alive, I will keep learning and improving. A wise man once said that dreaming only stops when you stop breathing.” 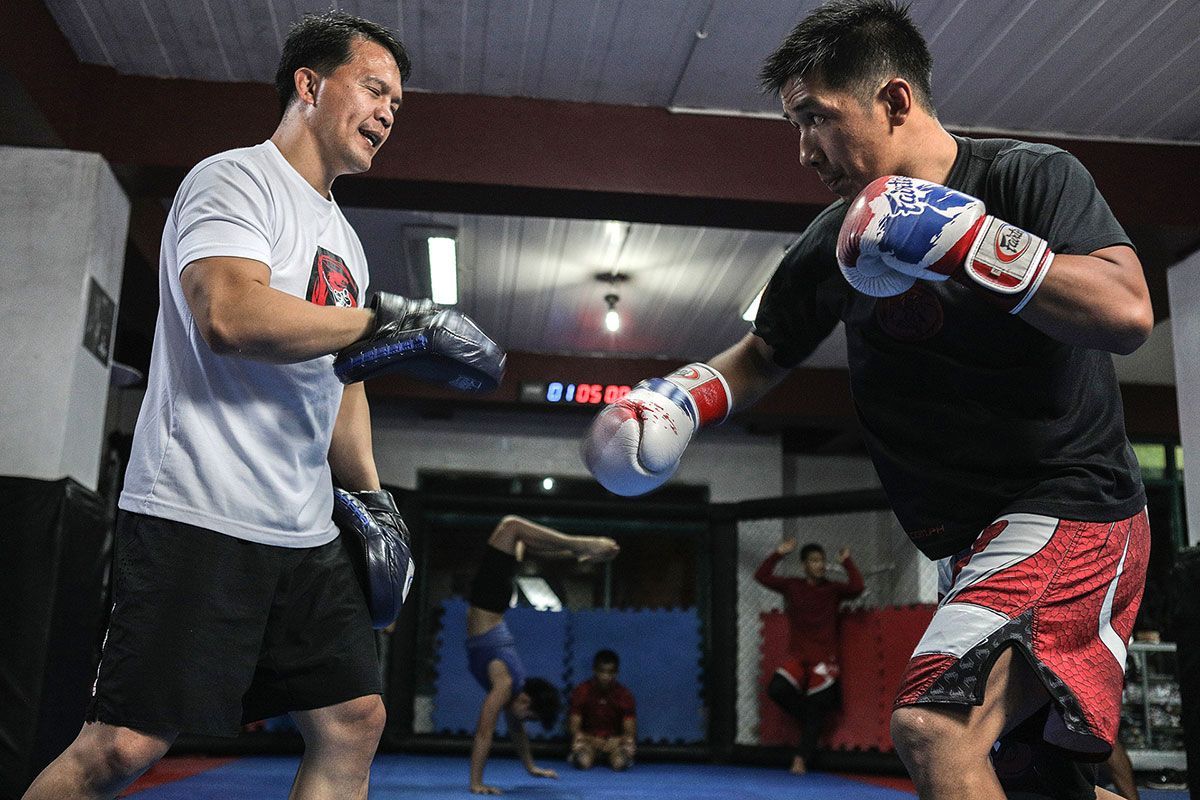 Avenging his loss to Moraes and becoming the undisputed ONE Flyweight World Champion is the main objective that lies in front of Eustaquio. However, he has one eye on some other goals he wants to accomplish in the future.

“Gravity” has expressed his desire to go back to school for a doctorate degree, and when his mixed martial arts career comes to an end, he hopes to stand beside Sangiao as his assistant coach.

In that role, he would be the educator, helping to guide the next generation of Team Lakay warriors.

“Learning makes us better people, and I will never stop learning – no matter what,” he says. “I also love to teach and impart my knowledge to the youth.

“I love education. I think it is my spiritual gift.”