Two vastly different trajectories will converge when Eduard “Landslide” Folayang meets “The Warrior” Zhang Lipeng in the main event of ONE: BATTLEGROUND II this Friday, 13 August.

Folayang, a former three-time ONE Lightweight World Champion, desperately needs an impressive performance to maintain his status in the division. And on the other side, the surging Zhang is eager to keep rolling and make a big first impression on the global stage.

Here are the keys to victory for both men in their crucial mixed martial arts battle at the Singapore Indoor Stadium.

As always, Folayang’s world-class wushu skills will be his biggest asset.

He will need to utilize his full repertoire to keep Zhang at bay, but fortunately, he has plenty of tools to utilize inside the Circle.

“Landslide” does have a strong jab, though it’s a technique he should employ more. Mixing in an assertive lead hand would help keep him at the optimal distance to attack with his longer-range kicking arsenal.

Moreover, his side kicks can maintain the space between the two men and disrupt Zhang’s movement toward the inside.

With room to work, the Team Lakay icon can blast away with his punishing low kicks that slow his rival down, and he will also have room to let rip with his spinning attacks — most notably, his back kicks and backfists.

#2 Zhang Breaking Through To The Clinch

While “The Warrior” may have to wade through some fire to get close to Folayang, doing so is likely his best option to negate the Filipino’s biggest strengths and bring the bout into his own wheelhouse.

Folayang’s explosive sprawl and strong underhooks make him a difficult man to take down with shots from the outside, but opponents have been able to drag him down to the canvas from close quarters.

Zhang likes to work from double underhooks and has a variety of trips and sweeps that he can utilize, especially if he can drive his foe to the Circle Wall — much like Antonio “The Spartan” Caruso and Shinya “Tobikan Judan” Aoki did recently to establish the blueprint.

The Chinese star owns enough venom in his left hook and overhand right to put “Landslide” on the defensive. In those instances, Zhang can back Folayang up, take hold, and attempt to force a ground battle. 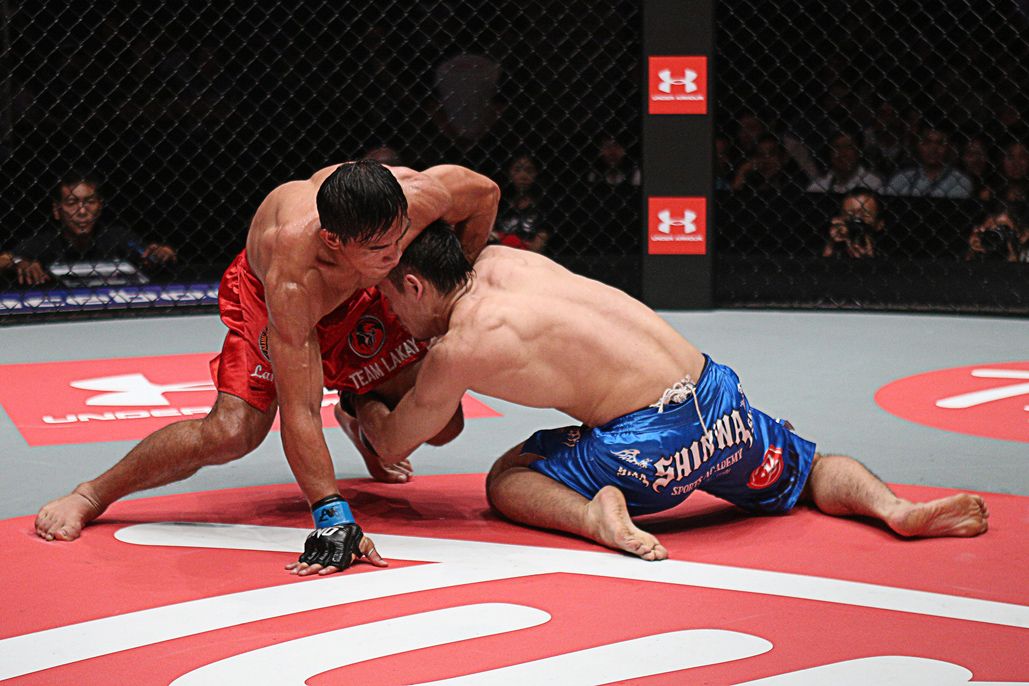 If Zhang does manage to penetrate Folayang’s defenses and get him down from the clinch, the Team Lakay man must use his power and athleticism to disengage and stand back up as quickly as possible.

“Landslide” is good at using his strong upper body to create frames and get underhooks so he can work his way back up against the Circle Wall. Also, he can threaten with a guillotine choke in order to force a reaction and make space.

Prolonged periods on the ground would weigh heavily in the debutant’s favor, but Folayang rarely loses his composure, even if he seems to be down on the scorecards.

On that note, “Landslide” has the most cage time of any athlete in ONE, and he’s faced the best of the best in the lightweight division. Combined with his endless gas tank, it’s clear he will never give up.

Even late in the bout, expect to see the Filipino working hard to regain his feet for one last attempt at a winning salvo.

With Folayang so persistent from underneath, Zhang needs to make sure he isn’t just trying to smother from the top, but also forcibly making a dent on the contest with his ground-and-pound.

The GP Mixed Martial Arts representative likes to dish out a lot of damage from above, and if he’s aggressive with his output, it means Folayang can’t easily commit his arms when he attempts to regain his feet.

Instead, the Filipino will have to constantly defend “The Warrior’s” hard punches and elbows, as well as the triple threat that comes into play with his guard passes and submissions.

Zhang can finish with strikes on the ground or capitalize on his hurt opponents by hunting for submission finishes.

If he gets “Landslide” down, keeping him there is not inevitable, so he will have to make the most of every moment to inflict damage en route to victory.

Read more: 3 Dynamic Submissions From The Stars Of ONE: BATTLEGROUND II