Celebrate the best of martial arts with ONE Championship and the world’s top martial artists and fighting games esports players in the heart of Shibuya over 2 days!

ONE Championship will be holding its 100th ever event on 13 October in the landmark Ryogoku Kokugikan in Tokyo, Japan. To commemorate this historic occasion, ONE is holding its first ever Martial Arts Fan Fest, which is proudly supported by AbemaTV.

Join us on both days to enjoy open workouts with our ONE: CENTURY superstars like Demetrious Johnson and Aung La N Sang, take part in exclusive athlete seminars with martial arts legends Miesha Tate and Shinya Aoki, and not to mention meet-and-greet your favorite ONE Championship athletes and ring girls in exclusive autograph sessions.

In addition, catch our special edition of Rich Franklin’s ONE Warrior Series: Japan vs. The World live, which will be held for the first time in Tokyo and broadcast live on AbemaTV. Lastly, don’t miss out on a chance to get your hands on some very special limited edition ONE: CENTURY merchandise!

Together with ONE Esports, the Martial Arts Fan Fest will also host the ONE TEKKEN Tokyo Invitational and ONE Street Fighter Tokyo Challenge, which will give members of the community to play alongside and compete against some of the top fighting games players in the world for a combined prize pool of over JPY 3.5M. Join us for an exciting display of striking skills from Shin Karate! Shin Karate has a history dating back over 30 years and is adapted from the traditional Japanese martial arts discipline of karate. Watch the youngest and brightest striking talent from aged 10 and above compete on their biggest stage yet. The best performing athlete will also earn an opportunity to interview and meet their favorite ONE: CENTURY athletes.

Since 2018, former Middleweight World Champion and mixed martial arts Hall of Famer Rich Franklin has traveled all around Asia to find the best up-and-coming martial arts talent, including ONE Atomweight Kickboxing and Muay Thai World Champion Stamp Fairtex. In a special Japan vs. The World edition of ONE Warrior Series, Japan’s rising stars will take on other young upstarts from around the globe to earn a contract with ONE Championship worth USD $100,000.

Shooto is the world’s oldest mixed martial arts organization and has a history dating back over 30 years. Find out more about the Shooto discipline and witness young Shooto athletes compete in an amateur competition and earn an opportunity to meet their favorite ONE: CENTURY athletes.

Former Women’s Bantamweight World Champion and ONE Championship Vice President Miesha Tate will impart her mixed martial arts knowledge in an exclusive seminar. Limited to (20) sign-ups on a first-come-first-served basis. Registration opens at 10:00 at the Registration Counter.

Former ONE Lightweight World Champion Shinya Aoki faces off against Honorio Banario in ONE: CENTURY. Before that, learn a variety of grappling skills from one of the best grapplers in the world. Limited to (20) sign-ups on a first-come-first-served basis. Registration opens at 10:00 at the Registration Counter.

The ONE: CENTURY card is stacked from head to toe with 4 world championship bouts, and 3 world grand prix final bouts. Don’t miss World Grand Prix finalist Demetrious Johnson, as well as ONE World Champions Aung La N Sang, Angela Lee, and Brandon Vera, and our other ONE: CENTURY headliners come together to demonstrate their World Championship skills in an exciting open workout to close out the Fan Fest. 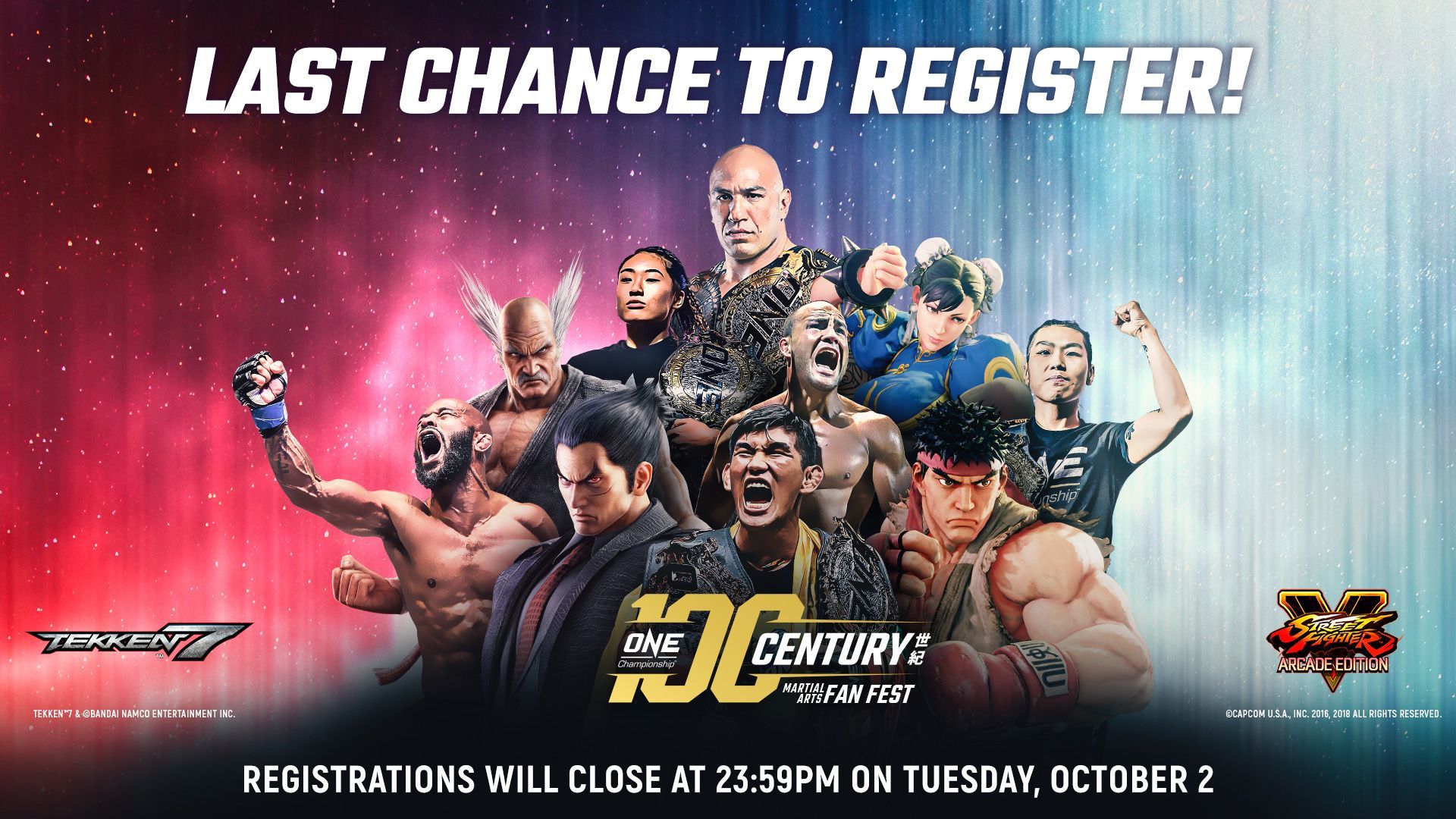 Witness Team Japan, Team South Korea, and Team All-Stars face off in the first-ever ONE TEKKEN Tokyo Invitational. We have specially invited some of the world’s best Tekken players including Rangchu, Ulsan, Double, Anakin, Super Akouma and many more.

Better yet, team up with your friends and challenge other teams from the TEKKEN 7 community in our 3v3 Community Tournament. The top team will earn the coveted fourth spot in the ONE TEKKEN Tokyo Invitational Semifinals to take on the top TEKKEN players in the world to compete for a prize pool of JPY 1.5M!

10 of Asia’s top Street Fighter players will gather in Shibuya for a regional showdown like no other!

Join in the fun in our 1v1 Community Tournament, where the top two players will earn their spot to represent Team Japan together with our mystery guest. A total prize pool of JPY 2M is at stake!

Lastly, don’t miss out on other fun activities like professional and celebrity show matches featuring our ONE Championship athletes!

Get your hands on exclusive limited edition merchandise over the two days! Load More
Previous: ONE Hero Series September All Events Next: ONE Warrior Series 8