“Wolf Warrior” Hu Yong made a grand introduction to the ONE Championship main roster by showcasing his impressive all-around game at the Singapore Indoor Stadium.

The ONE Hero Series standout turned to his top-notch grappling in the latter stages of his promotional debut and scored a convincing unanimous decision win over Yodkaikaew “Y2K” Fairtex in the curtain-raiser of ONE: FISTS OF FURY III, which aired Friday, 19 March. “Y2K” started the first frame aggressively by pushing forward with his striking. But Hu patiently waited for an opening and then landed a beautiful right just as the Fairtex product was going for an inside leg kick – one that grazed the Chinese flyweight’s groin and forced a brief stoppage.

Soon after the mixed martial arts bout restarted, Yodkaikaew landed a Superman punch before loading up on a straight left that connected solidly.

Yodkaikaew continued to increase the pressure, forcing exchanges in the pocket while employing his left hand, which caused some damage above Hu’s right eye. Sensing that his foe was starting to feel the attacks, the Thai pressed forward, but that aggression didn’t last long.

The tide turned midway through the first round as the Chinese athlete started to connect with his powerful right hand. Then suddenly, Hu stepped forward with a looping left that just missed the mark, but an explosive right followed that cracked “Y2K” and sent him staggering to the canvas. Hu went to follow up with ground strikes, but Yodkaikaew popped ahead with a double-leg attempt and used the move to get back to his feet. However, he ate a heavy knee and short right for his troubles.

Looking to swing the momentum back to his favor, the Fairtex man pressed ahead and continued to exchange leather with the ONE Hero Series upstart. Eventually, the two got tied up in a clinch and “Wolf Warrior” tripped the Thai to the ground.

The Chinese star landed some ground-and-pound, but Yodkaikaew kept moving, gave up his back, worked back up to his feet again, and separated from his hammering foe.

In the final minute of the round, the two continued to exchange strikes in the hope of landing the knockout blow. But Hu changed course, went for a double-leg, and then burst upward and scored a takedown. Though “Wolf Warrior” continued to dish out punishment, Yodkaikaew scrambled back to his feet and even went for a kimura near the Circle Wall, to no avail. 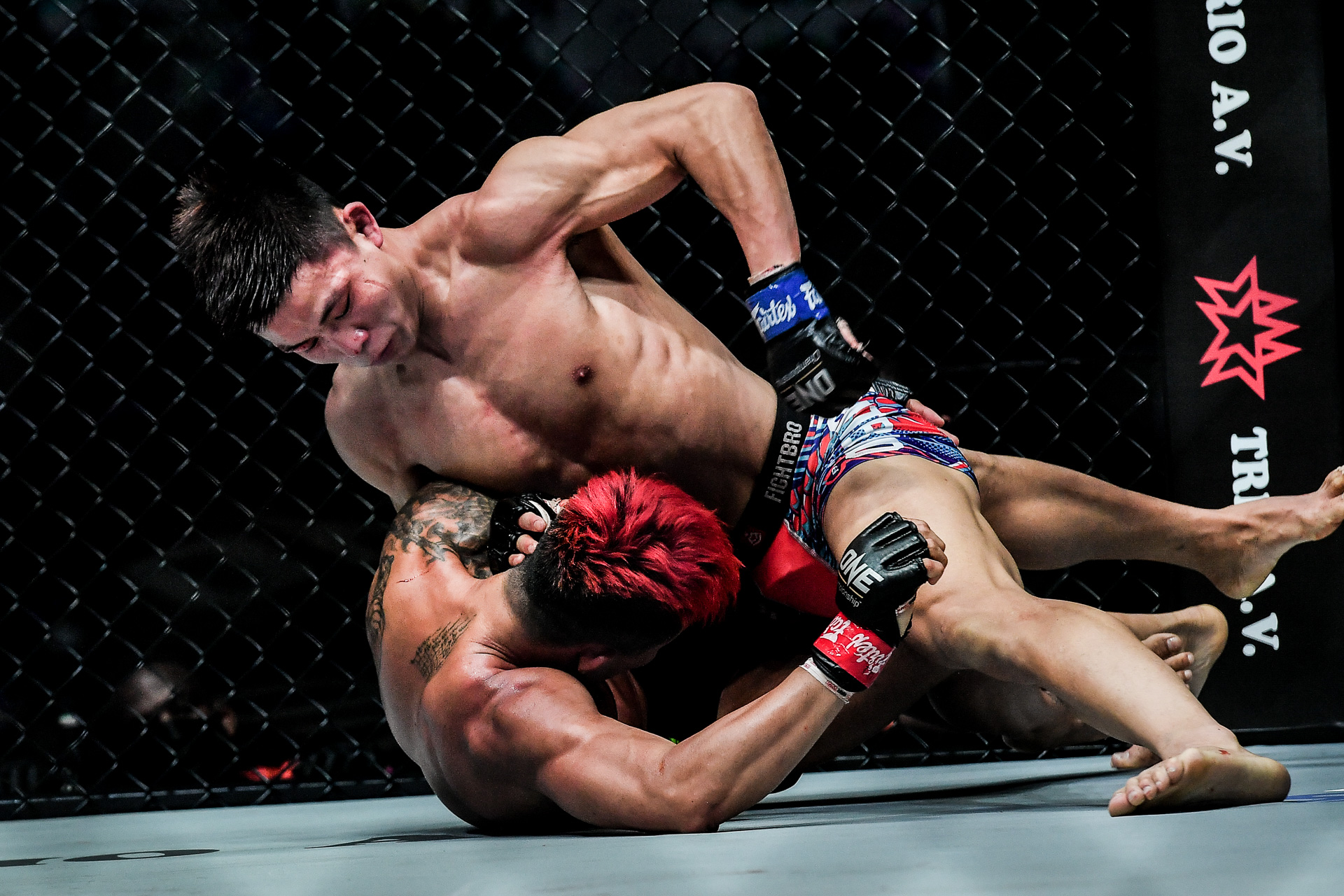 After a back-and-forth opening stanza, it was all Hu the rest of the way.

Following a brief exchange on the feet in round two, “Wolf Warrior” quickly shot for a takedown and landed in side control. Yodkaikaew was able to escape, but that didn’t last long, as the Fighting Bros Club representative committed to takedowns and repeatedly took his Thai opponent to the mat.

Though he wasn’t able to control Yodkaikaew on the ground for long, Hu made sure to stay busy each time he landed on top and then secure takedowns the moment the Fairtex product recovered his footing.

The same strategy worked for the OHS alumnus in the third round, as he stayed the course with his takedowns – and tried to keep the Thai down there for longer.

That strategy worked to perfection for “Wolf Warrior,” as he managed to advance his position and inflict damage each time he scored a takedown. The match ended on a fitting note, with Hu standing over Yodkaikaew on the ground as time expired. Immediately after the final bell, the Chinese athlete began celebrating, knowing that he’d done enough to earn the decision – and he was correct.

With the impressive debut victory, Hu improved his record to 7-2 and sent a message to the ONE flyweight division that he’s a force to be reckoned with.