Han scored a unanimous decision win over Adam Noi in their bantamweight tilt at the previously recorded ONE: FISTS OF FURY II, which took place at the Singapore Indoor Stadium and aired on Friday, 5 March. 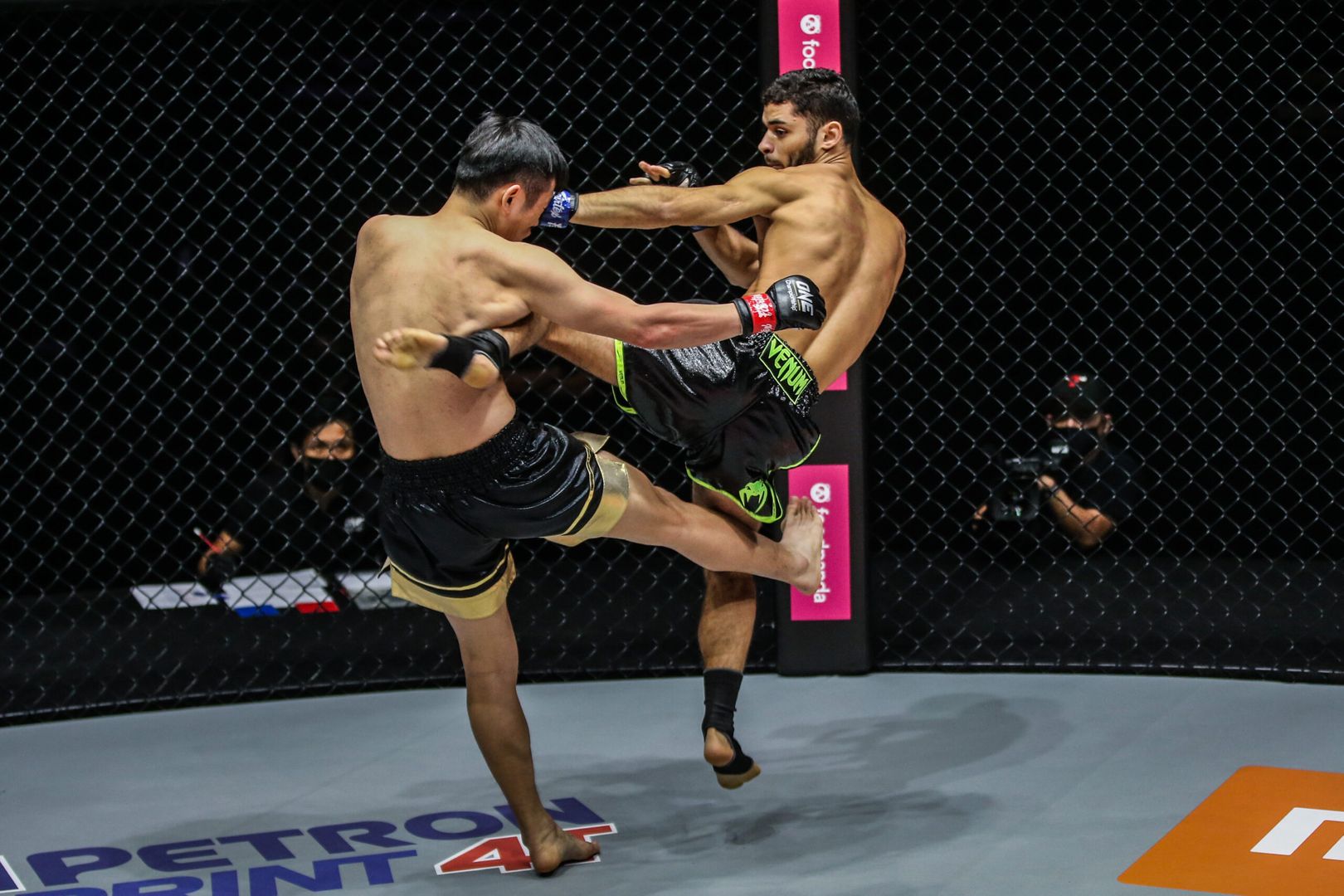 The first round started slow but grew into a kicking match, as both men swung legs into each other’s thighs.

However, Noi worked his way up the side of his opponent’s body with high kicks, and eventually, one of them sunk into Han’s right arm. Feeling confident, the Venum Training Camp product doubled up on his output, but Han scooped the final attempt and swept the Algerian to the canvas.

In the opening moments of round two, Noi launched a left high kick at Han, but just as his leg was mid-flight, the Chinese athlete cut through the supporting leg and sent Noi to the ground again. 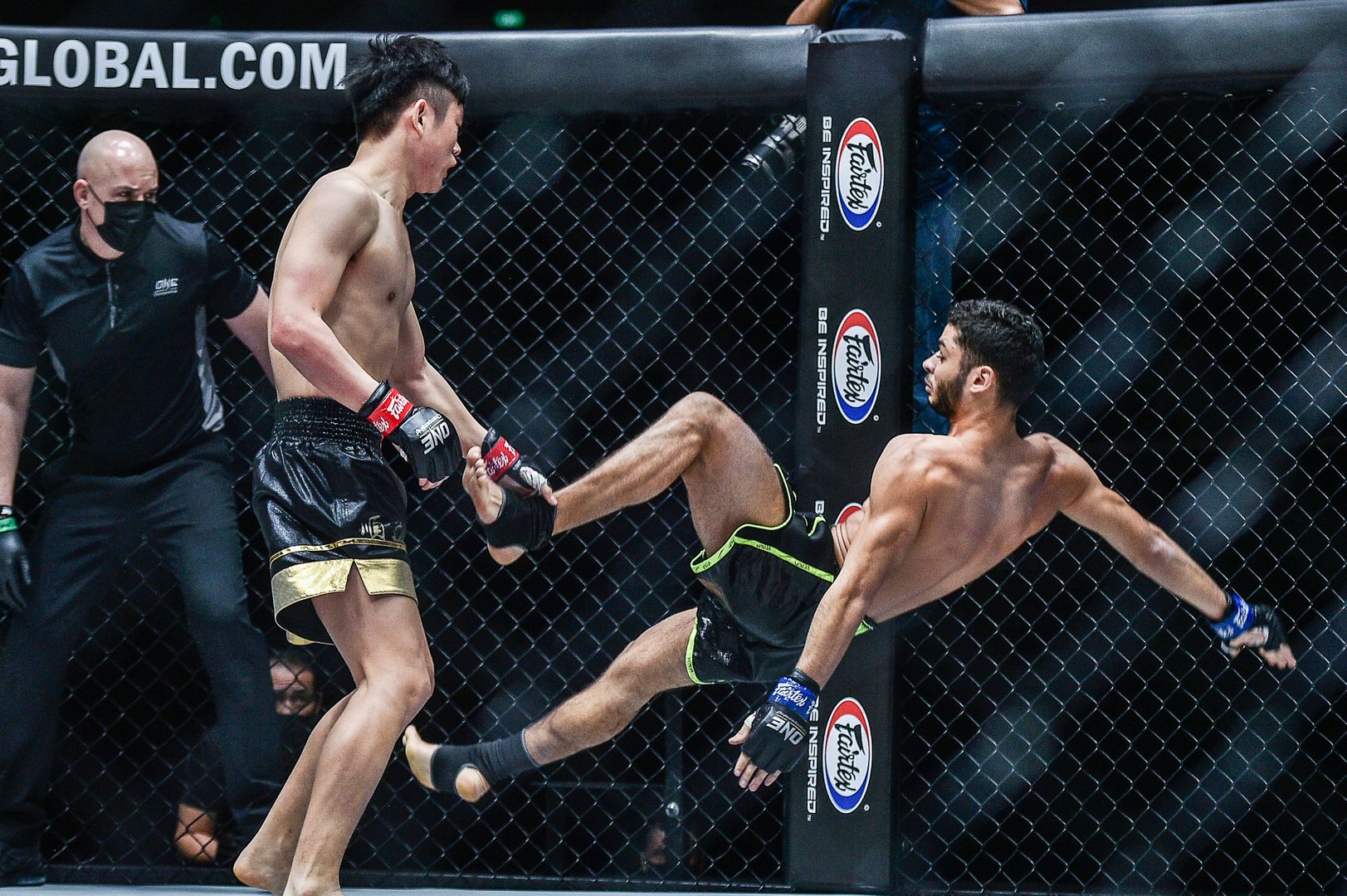 After the Algerian returned to his feet, Han peppered him with one-off shots for the next 60 seconds, beating his foe to the kick and punch frequently. He also began varying up his attacks, starting high with jabs and hooks and then finishing low with kicks. This strategy kept Noi on his toes.

On the other side, Noi’s decisive moment in round two came when Han lunged in for a left punch. The Algerian dipped and sidestepped to the right, and as he popped his head up, Han wound up for a right punch. But Noi, looking as if he was trying to juke a rushing linebacker, dipped again and sidestepped left.

Han, however, was determined to catch his foe and rushed in for a third time. As he stepped forward, Noi threw a left horizontal elbow that connected with the Chinese striker’s jaw and stopped him where he stood. 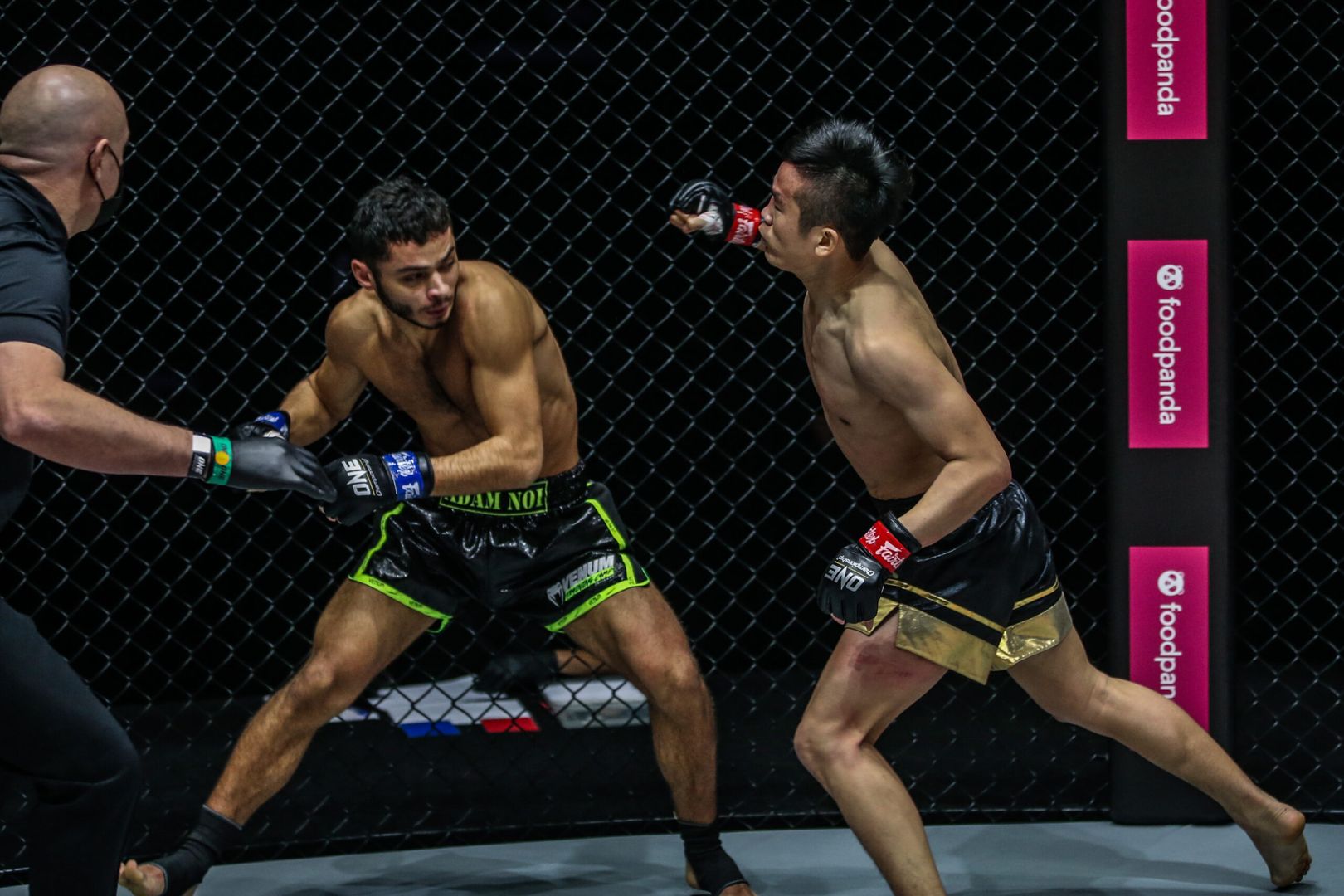 Going into the final canto, the bout was up for grabs – and both men sensed it.

Han tracked Noi around the inside perimeter of the Circle Wall, trying to pin down the pawing Algerian. But when he finally did, Noi sent his left foot straight up the middle and into Han’s face, hinging his head like a Pez dispenser.

Han shook it off and again shadowed his opponent around the cage, where he was forced to settle for a lazy left push kick.

Noi, though, caught Han’s ankle in the palm of his left hand. He then used his right leg to sweep his foe’s supporting leg while simultaneously using his right hand to torque him so powerfully that Han’s head hit the canvas and he was staring straight up at his own feet. 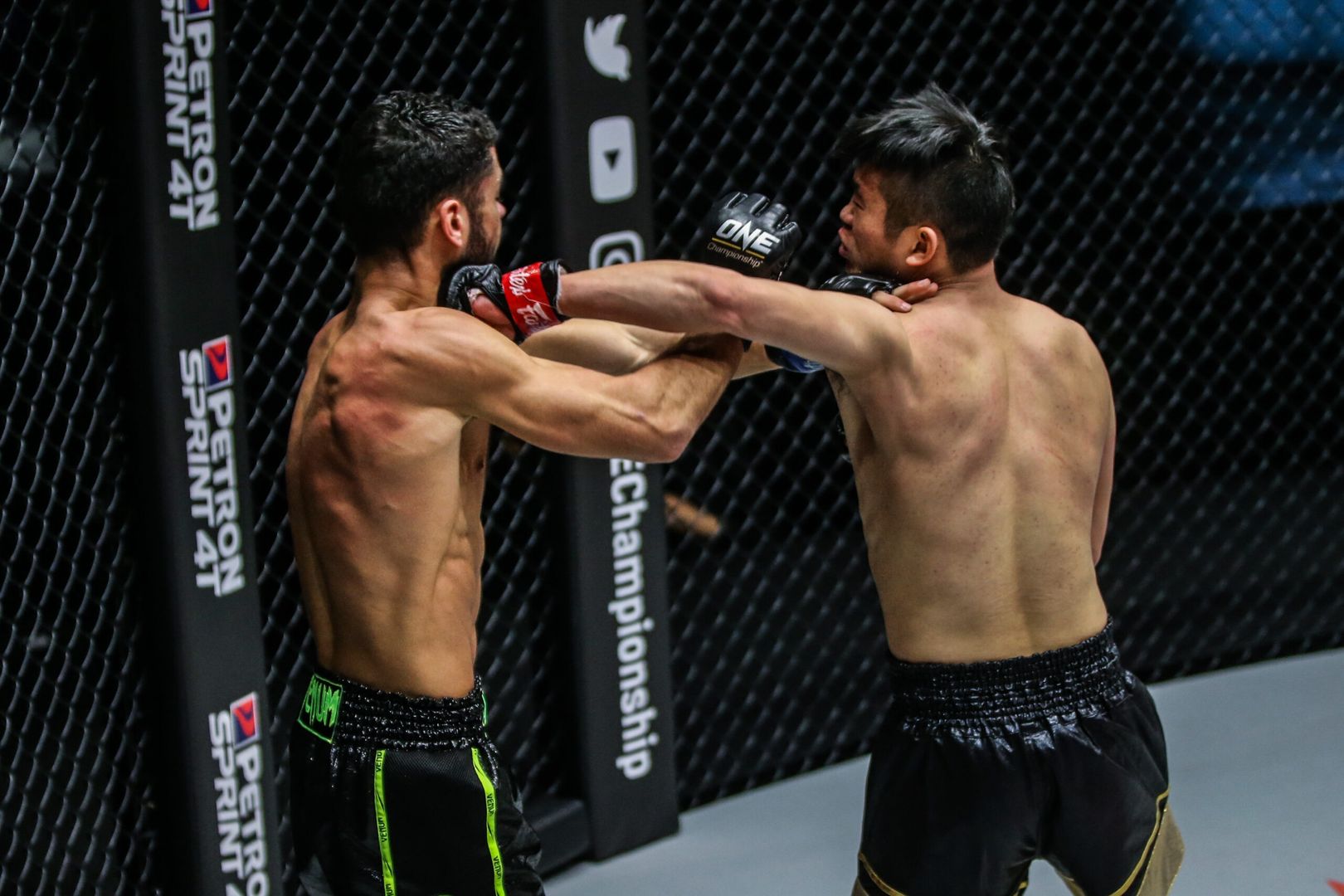 Next, the two men met in the clinch for the first time, and Noi timed another excellent takedown, this time using Han’s aggression against him. The Algerian stuck his left hand under Han’s right armpit, pushed him sideways, and sent him tumbling to the canvas.

A three-punch combination from Han signaled a final march for glory, and it was just what he needed in order to win over the ringside judges.

After three thrilling rounds, all three officials awarded the unanimous decision to Han, which moved his record to 62-18 and revived his name in the bantamweight Muay Thai division. 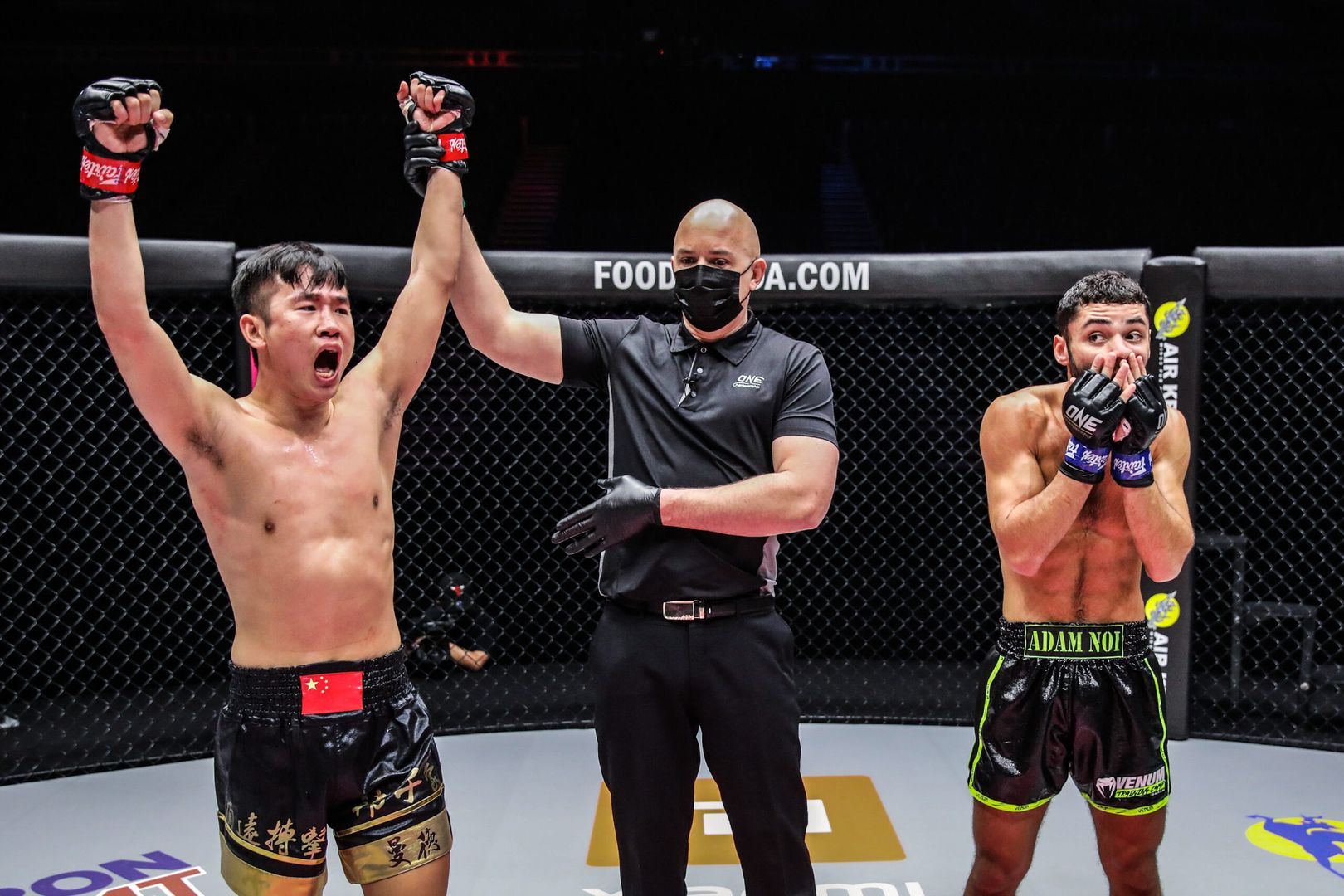