The ring is a sacred place where martial artists have the opportunity to showcase their skills and forge special memories that will last a lifetime.

But for Australian couple “Ruthless” Ryan Robertson and Kristy “KO” Obst, they recently experienced a precious moment in the squared circle that did not have anything to do with the spirit of competition.

Actually, it was a beautiful display of the love the two share for each other.

Just hours following Obst’s impressive first-round technical knockout victory at ONE Warrior Series 9 on Wednesday, 4 December, all of the athletes gathered in the squared circle.

ONE Warrior Series CEO Rich Franklin called “KO” to the center of the ring and gave her a performance bonus for her exquisite finish against Vietnamese-Australian rising star Uyen Ha.

Franklin then handed the microphone to Robertson, who proceeded to congratulate his girlfriend on her win. Then, he pulled out a small box from his pocket, got down on one knee, flashed Obst the dazzling ring, and proposed to her.

She covered her mouth and, without hesitation, immediately said yes.

“I had no idea this was going to happen,” the 30-year-old confesses.

“I had this thing in my head that I was never going to get married. I didn’t even know where that came from. I just thought it would never happen. We don’t have a lot of money, and [I did not think] Ryan would buy me a ring. This ‘marriage thing’ never crossed my mind.

“Although I didn’t expect it, I just knew we were going to be together forever.” 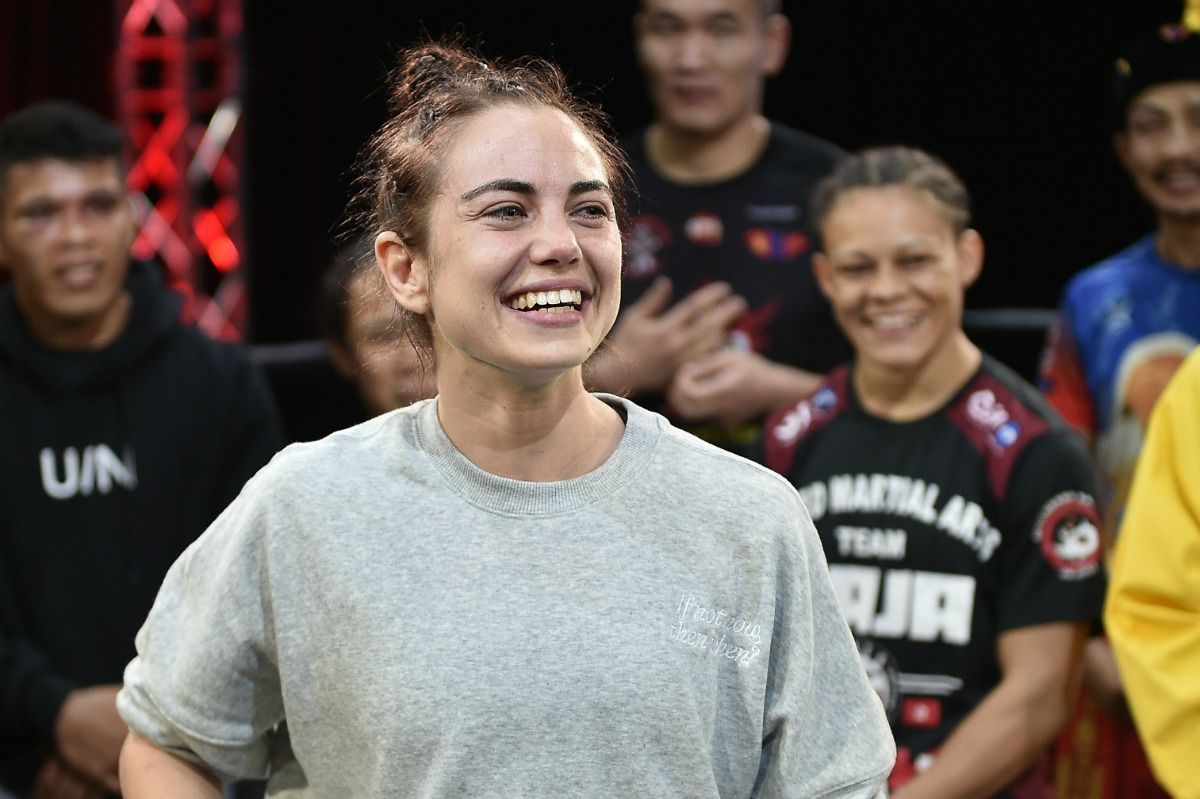 As perfect as it sounds, this wasn’t love at first sight.

In October 2017, Obst was looking for a new martial arts school to join. Just a year earlier, “KO” left Riddlers Gym in Perth, Australia and took a sabbatical from her Muay Thai training to address some health issues.

She sent a Facebook message to Robertson, who owns and operates Martial Arts & Fight Centre. Obst, who previously met him at a mutual friend’s birthday party, expressed interest in training at his academy and also learning Brazilian Jiu-Jitsu.

It started out as the usual coach-student relationship, and her growing passion for mixed martial arts led her to compete at the amateur level.

Over time, their bond strengthened. They frequently dined out with the other gym members following their training sessions, and through these activities, the two learned they also shared a likeness for strong values, kids’ movies (Frozen, anyone?), and good coffee.

In September 2018, their relationship went to the next level.

Robertson drove to Obst’s residence, picked her up, and took her to a coffee shop. Then, the pair had a very honest and genuine discussion.

“He sat really close to me. I was like, ‘What’s going on here?’” she recalls with a laugh. “We first openly spoke about how we were feeling about each other. I think we both knew something was going to happen because we felt the chemistry between us.”

Robertson had been falling more and more in love with Obst ever since she made her amateur debut several months earlier, and he used this impromptu coffee shop date to define their relationship status.

“From coaching her first couple of fights, we just grew closer, and it turned into a relationship,” the 32-year-old offers.

“That’s what made us grow together very well. We both had similar goals and dreams. We were both supportive of each other and wanted to help each other succeed, and we both had mutual respect for each other and our differences.”

The Australians had to find a delicate balancing act.

Robertson served as Obst’s coach and boyfriend, and he is also a martial artist who aspires to be a World Champion, too.

If this relationship was going to work, the two needed some ground rules to help ensure they could achieve success — both in their professional lives and personal lives.

“We had to put some guidelines down,” Obst explains. “Fighting comes first, so whatever happens here, we weren’t going to let this get in the way of our own goals and dreams.”

Robertson also remembers one of the initial conversations they had as a couple.

“When we first started dating, Kristy said to me, ‘We can only date if my training is not affected by the relationship.’ Because I’m her coach as well, we had to separate our relationship and coaching,” he recalls.

“I treat every student of mine equally – it doesn’t matter if they are my partner, friend, or student, everyone is treated equally. I have equal love and passion for each person no matter who they are, so I am pretty good at separating those sorts of things.”

This girl is amazing ❤❤ @kristy_ko_obst

That proved to be true. Not only did their relationship continue to blossom, but Obst made the jump to the professional ranks and won her debut against Claudia Diaz via second-round TKO at ONE Warrior Series 5 this past April.

Months following her debut victory, Robertson was developing a masterplan to propose to his girlfriend the next time they went to Singapore for a match. “I knew I wanted to spend the rest of my life with Kristy,” he admits.

The Aussie researched for romantic places in “The Lion City” to ask for her hand in marriage, like the Gardens By The Bay. However, as time passed, Obst did not have a bout scheduled and soon, her beau decided to alter his plan.

“I started talking to Bashir [Ahmad, matchmaker for ONE Warrior Series] and asked him if it would be okay to propose to Kristy in the ring after a fight. He told me he would have to talk to the promotion,” Robertson explains.

“After that, he came back to me and said, ‘Yeah, it’s cool. We probably won’t air it, but let us come up with a plan.’ So we were talking back and forth.” 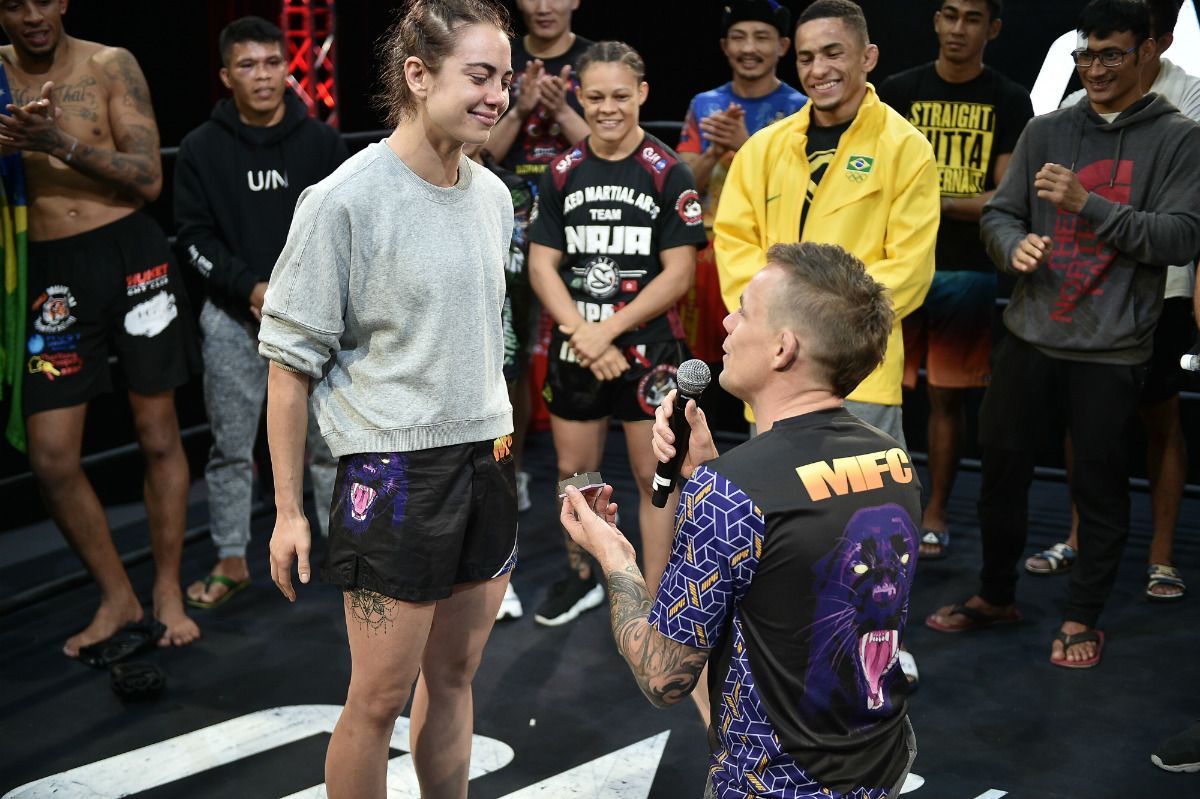 As ONE Warrior Series 9 drew near, Robertson’s nerves spiked up. He was fearful Obst would learn of his surprise proposal, and the mere thought made him a little paranoid.

“I had the ring hidden in my mum’s house so Kristy wouldn’t stumble across it,” he says with a chuckle.

“I made sure it stayed hidden the whole time on the [way to Singapore], too, just hoping she wouldn’t go into the wrong pocket of my bag and find it.”

Those emotions only intensified after “KO” defeated Ha, and then even more so when all the athletes entered the ring for the awards ceremony later in the night.

“I was so nervous while I was waiting, too,” he continues. “I was playing with the ring box, making sure I kept it in the right pocket. I was stressing out!”

Despite the anxiety, everything went according to plan. After Franklin awarded Obst with a performance bonus, he gave the microphone to Robertson, who asked for her hand in marriage. 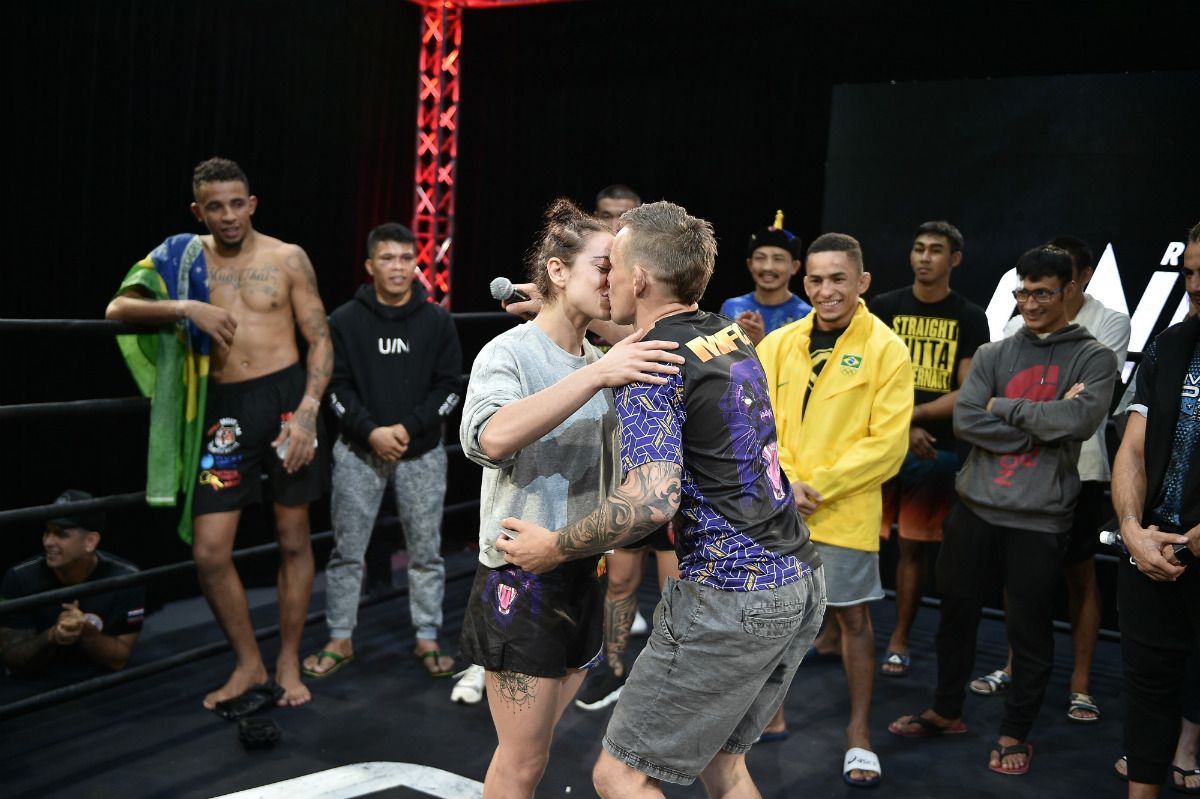 Robertson and Obst may be engaged now, but the two have a few things to accomplish before they walk down the aisle and say, “I do.”

In January, the happy couple will relocate from Australia to Indonesia, where they will start training at Bali MMA, drink even more coffee, and continue chasing their respective martial arts dreams.

Although the two have yet to make official wedding plans, they have floated around some ideas. The Aussies have already decided they will not get married inside the ONE Warrior Series ring, but they sound interested in having a certain legend host the event.

“Rich Franklin might have to be our emcee,” Robertson says, excitedly. “That would be crazy.”

Whether Franklin serves as the wedding’s emcee or not remains to be seen. But one thing is for sure: both Robertson and Obst will forge another precious moment that will last a lifetime.