‘I Chose MMA As My Destiny’ – Get To Know Road To ONE: Mongolia Winner Enkh-Orgil Baatarkhuu 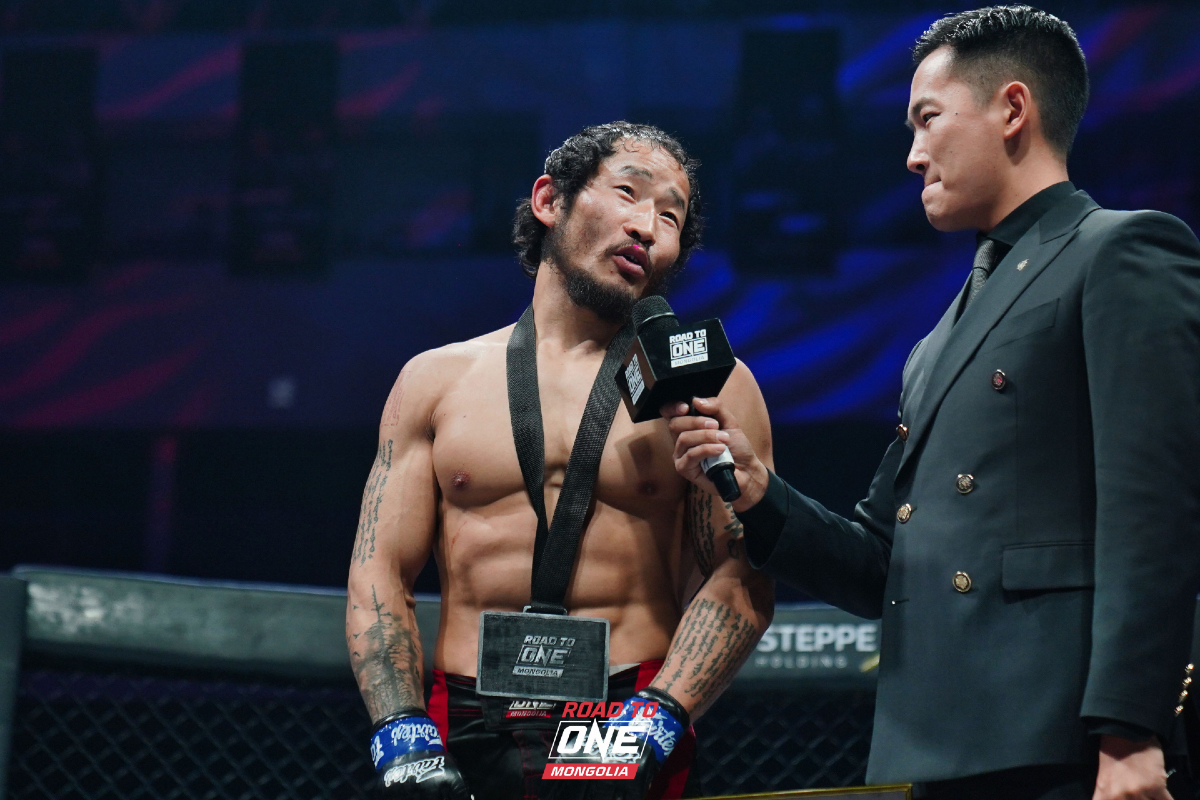 Enkh-Orgil Baatarkhuu wants to follow in his coach’s footsteps by reaching the top of the mixed martial arts world.

The rising star is trained by former ONE Featherweight World Champion Narantungalag Jadambaa, and after winning the first season of Road to ONE: Mongolia and earning a US$100,000 ONE Championship contract last month, it’s quite clear that he is on the right track.

Baatarkhuu does not expect the path to be easy. In fact, he knows the real work starts now. However, with his iconic countryman in his corner, the 34-year-old feels ready to take on any challenge.

Ahead of his promotional debut next year, learn all about Baatarkhuu’s humble roots in western Mongolia and the unflinching support that has led him to the world’s largest martial arts organization.

Baatarkhuu was born in Khovd – the capital city of the Khovd Province – on December 30, 1988. His mother was a nurse and his father was a truck driver, and he was raised with his older brother and younger sister.

The martial artist has fond memories of his childhood, which was spent largely outdoors.

“I grew up herding sheep and goats in the beautiful landscape, riding horses, fetching water from the river, and collecting dried cow dung as fuel. Just like any other Mongolian boy.

“I grew up very close to my mother, my older brother, and my little sister. My father was a long-haul truck driver, so he was often not at home because of his work.”

Baatarkhuu wasn’t a bookworm by any means, but he performed well enough on his tests and forged solid relationships with his classmates.

Also, the young Mongolian never went looking for trouble. In fact, he tried to avoid it. However, he refused to be anybody’s punching bag.

“I wasn’t a very good kid academically. I was just an average student. But I did enjoy geography, history, and P.E., and I got good grades.

“I wasn’t exactly the most popular kid, but I had a lot of friends. I wanted to get along with people and never wanted conflict and violence. But I never backed down from a fight if absolutely necessary.”

Combat In His DNA

Baatarkhuu was exposed to combat sports organically in his youth. During his childhood, he frequently watched his favorite action heroes on television and often engaged in unorganized grappling sessions with the other kids in his community.

The Mongolian enjoyed those activities so much, he eventually sought out formal wrestling training and looked to master the martial art. But ultimately, it led him somewhere else.

“One of the daily activities for a normal Mongolian boy is to wrestle, as we have a fighting spirit in our blood. I liked wrestling and fighting and wanted to be like my idols on TV – Jackie Chan, Jet Li, Jean-Claude Van Damme, and Arnold Schwarzenegger. I wanted to look like them. I wanted to be ripped.

“I joined the freestyle wrestling club when I was in the fifth grade. But after only two months, I decided to leave it and join the taekwondo club practicing next door, as I was more interested in kicking and punching than just grappling on the ground. That’s when my life’s path began to turn toward martial arts.”

The young Mongolian had found his passion, but it wasn’t easy to pursue when he was from a humble background. However, his mom was willing to do whatever was necessary to help her son succeed.

“My mother was my biggest supporter. When I went to Ulaanbaatar to take part in my first taekwondo competition, my mother took out a payday loan and paid for my travel expenses. She worked as a nurse at the local hospital at the time and her salary wasn’t very high.

“For a poor family like ours, taking a payday loan means making a lot of sacrifices. But my mother thought it was more important to support her son’s dream – the dream of becoming an Asian, World, and Olympic Champion in martial arts, and making my people proud.”

The Khovd native had dreamed of being an Olympic gold medalist in taekwondo and competing as a member of the Mongolian national team, but when that failed to come to fruition, he decided to try something new. In 2009, he discovered mixed martial arts and fell in love.

Baatarkhuu was instantly enamored with the all-encompassing sport thanks to Canadian legend Georges St-Pierre, but he also looked up to Jadambaa and believed that his compatriot was the one to help him reach the top.

“At that time, Mr. Narantungalag was one of the biggest stars in Mongolian MMA, winning titles in Japan and China, so I wanted to be his student and train under his guidance. But I didn’t know where to find him.

“Luckily, I met one of his students at an event, who then introduced me to him. I was very nervous when I first met him. After all, he was my idol. Mr. Narantungalag was very kind to me and allowed me to train at his club, saying, ‘If you are going to train under my guidance, you must give your all.’”

Baatarkhuu complemented his MMA training at Avarga Institute of Physical Education, where he studied to be a bodybuilding and fitness coach.

After graduating in 2012, the Mongolian gained employment as a fitness coach for the Oyu Tolgoi Mining Company. Soon thereafter, he scored a lucrative job as a platform operator. Though he earned a much higher wage, he felt emptier and emptier as the years passed by.

“In 2016, everything changed. Even though I was financially comfortable at that time, I felt that something was missing. I felt like I wasn’t living my life to the fullest. Like, I wasn’t living at all. Just existing. That desire to achieve something great in my life was burning in my chest.

“So I asked myself, ‘What is the one thing that makes me feel happy and alive?’ The answer was fighting. Nothing compares to the feeling of being born again after a fight, as if everything is starting anew. Pure adrenaline. I love that feeling, and so I chose MMA as my destiny.”

After many years of hard work, determination, and sharpening his skills on the national scene, the chance of a lifetime came up for Baatarkhuu in 2022.

ONE Championship partnered with Steppe Link Holding for the inaugural season of Road to ONE: Mongolia, a 10-episode reality series featuring two teams of MMA fighters competing for a single US$100,000 contract and roster spot with the world’s largest martial arts organization.

When Jadambaa learned about it, he immediately told his protege and decided to enter him into the competition.

“I first heard the news that Road to ONE was going to be held in Mongolia from my coach. We have talked many times before about going abroad to fight, but we couldn’t decide exactly where to go and which promotion to fight in. So, the news of Road to ONE: Mongolia made me really happy.”

Baatarkhuu made the most of the opportunity. He earned back-to-back victories during the show’s live two-part finale at Steppe Arena in Ulaanbaatar, culminating with a one-punch KO of Bat-Ochir Batsaikhan to win Road to ONE: Mongolia and the accompanying six-figure contract with ONE Championship.

Now a member of the organization’s roster, Baatarkhuu is preparing to make his promotional debut in 2023 and looks to strike ONE World Title gold just like his mentor.

“My goal is clear: the ONE Championship belt, and I won’t rest until I have it. I want to show my opponents how strong Mongolian fighters are. I want to show how fierce and dangerous we are, just like our ancestors who conquered half of the world. The fighters who will face me on the ONE Championship stage need to be prepared for everything. That is my message, be prepared for everything.”