Geje “Gravity” Eustaquio has emerged as one of the most revered sporting heroes in the Philippines.

The Baguio City native is the reigning ONE Interim Flyweight World Champion, a veteran influence for his Team Lakay stablemates, and a role model for Filipino youth.

Yet behind his immense success, he credits one individual as his main influence – guiding him throughout his formative years and shaping him into the man he is today: his father.

“My dad and I were very close,” the Igorot athlete begins. “He has always been my greatest teacher and mentor. He was the man of the house and an amazing provider for our family.

“Although he left the family to work overseas, I always understood his reasons.”

Due to economic hardship, many Filipinos are forced to seek employment in other countries to provide for their families.

Eustaquio’s father decided to move to South Korea for the betterment of his wife and children’s future. He sacrificed time with his family just so he could give them a better life.

A tough childhood fostered a resilient spirit and the desire to do it all for family.

A tough childhood fostered a resilient spirit and the desire to do it all for family.Manila | 26 January | TV: Check local listings for global broadcast | PPV: Official Livestream at oneppv.com | Tickets: http://bit.ly/onesuperheroes18

Eustaquio was 9 years old at the time. It was immensely difficult for the developing martial artist, who looked up to his father. Nonetheless, he accepted that his dad was willing to do anything to support his family, and his absence forced the youngster to step into a larger role.

“Life was very tough, because I had to stand up for myself and my siblings,” he says.

“I had to basically take care of the responsibilities my dad left behind. He was away for 10 years. I really missed him.

“Luckily, I had martial arts to lean on. The money that I earned competing on the Philippine National Wushu Team, as well as from small, local promotions, really helped.”

Despite the heartache of having to live without his father by his side for so long, “Gravity” learned to cope with his situation, and prospered. Overcoming those difficulties helped him develop the values and characteristics that have allowed him to achieve great athletic success.

“In the end, the experience made me a better person. I choose to look at it as a positive thing in my life,” Eustaquio says.

“Us Igorots were born to conquer huge mountains, so no matter how hard things got, my warrior spirit did not allow me to give up. I kept pushing forward.”

Eustaquio’s father has since reunited with his family, and is now making up for lost time by surrounding himself with his loved ones.

It has been a great blessing for the 29-year-old to have his father back in his life. The elder Eustaquio has become his son’s biggest supporter, as he attends nearly all of his bouts and celebrates every career milestone with him.

Being able to share his life with his father once again, Eustaquio cannot help but feel thankful.

The Team Lakay veteran hopes to do the same for his son, and have the same type of close-knit relationship. However, his experiences have made him vow to handle things differently if he ever found himself in a similar situation.

“Leaving my son is not an option for me, and it will never happen. If I had to travel overseas for work for a long time, then I would have to make sure that he is with me,” he explains.

“Fathers are incredibly important in the lives of their sons. There is no stronger bond. I am grateful for my dad, who was there to guide me when I was little, and made sure I did not go down the wrong path.

“He taught me the greatness of humility, and that failure is the foundation of success. This I will forever live by.” 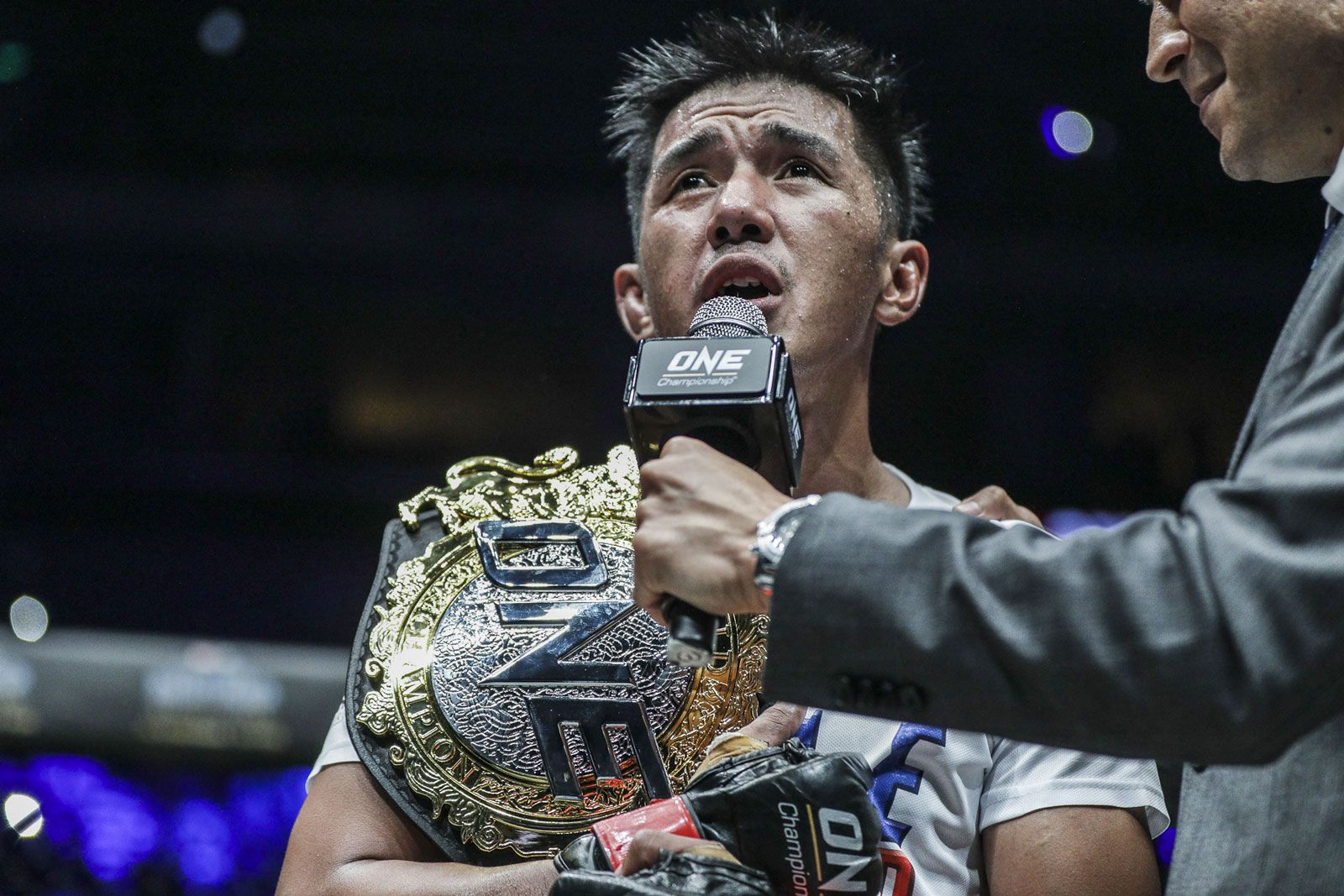 That lesson couldn’t apply more to “Gravity” than in his bout against ONE Flyweight World Champion, Adriano “Mikinho” Moraes, in the main event of ONE: PINNACLE OF POWER.

The five-round World Champion versus World Champion affair, which takes place at the Studio City Event Center in Macau, is a rematch of a contest the Filipino lost almost four years ago.

He used that as a platform to learn, improve, and work his way to the lofty position in the flyweight division he occupies today.

Though his father may have been absent in the past, there is no doubt in Eustaquio’s mind that his dad will be there on Saturday, 23 June, to watch him perform on the biggest night of his professional career,