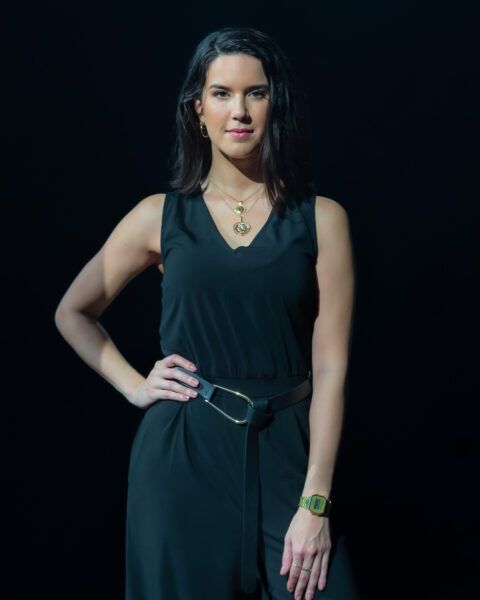 Jessica Ramella Wants To Empower Next Generation Of ‘Kick-Ass Businesswomen’

A few days before Jessica Ramella appeared in the finale of “The Apprentice: ONE Championship Edition,” she received a heart-warming and unexpected gift from her home country of Venezuela.

The faculty and students at Jessica’s former high school — Guayamuri School — on Margarita Island sent the candidate an emotionally charged video of them cheering her on as she prepared to battle fellow finalist Louie Sangalang in Episode 13.

Just days later, Jessica won the US$250,000 contract to work as ONE Chairman and CEO Chatri Sityodtong’s Chief Of Staff, and she couldn’t help but reflect on her younger days back home.

“Thinking about the video makes me emotional,” Jessica says. “When I saw it, I broke down crying. I haven’t been to that school in 13 years, nor did I think they remembered me.”

In the video, students can be seen and heard chanting for their compatriot.

Some of them are high school girls who live in the same town, sit in the same classrooms, and have the same dreams that Jessica once did. And “The Apprentice” winner wants those young ladies to know that they, too, can follow their entrepreneurial spirit.

“I want women from developing countries who don’t speak a word of English, have a million doors closed in their faces, have the odds stacked against them, to know they can become successful kick-ass businesswomen,” Jessica says.

“If you ignite women with the belief that they could achieve their dreams, imagine how endless the opportunities would be and imagine the new generation of children they would raise – that motivates me to be a great leader to other women.”

In the earlier episodes of “The Apprentice,” viewers only saw glimpses of the woman who would later become Chatri’s Chief Of Staff.

It wasn’t until Episode 5 that Jessica truly showed the grit and toughness that would carry her to victory. That week, the Venezuelan’s fellow Team Conquest members blamed her for their undoing in the business challenge.

However, she fiercely defended herself in front of Chatri and Co-Advisor Niharika Singh, garnering respect from both of them.

“The reason I transformed in the boardroom was because something that was so dear to me – like the competition – was being threatened by candidates who had other plans for me,” Jessica says.

That confidence carried over to the remaining episodes, as the determined candidate outworked each of her competitors, never once going to the chopping block.

But according to ONE’s new Chief Of Staff, many people have the idea of confidence all wrong, believing that a person must see themself as flawless to think that way.

“Confidence is not the absence of weakness. People feel that because they have insecurities, they’re not confident. Bravery and confidence come despite those feelings,” Jessica says.

“Confidence also comes from hard work and preparation. Successful people recognize their weaknesses and overcome them. That’s something I’ve done in my life. I’ve identified things that I wished were better, and I worked hard to change them.”

Whenever Jessica had doubts about the course of her life, she’s always asked herself a simple but revealing two-word question: “Why not?”

She posed that question at many major turning points in her journey, from leaving Venezuela despite naysayers to applying for “The Apprentice” despite the long odds of being picked.

Moreover, she asked that question in the finale of the show, but it wasn’t directed at herself. When ONE’s Chairman and CEO asked her and Louie one last time why he should pick them as his Chief Of Staff, Jessica flipped the script and asked Chatri, “Why not?”

It was a risky move, but the Venezuelan put all her doubts aside for one big reason.

“At that moment, my want was bigger than my fears. I knew I was the right person for the job. I had done everything in my power and shined at every challenge. There was nothing I would’ve changed in my performance,” Jessica says.

“When I stood in front of Chatri, I wanted to make him realize that as the person who would potentially sit next to him as his Chief Of Staff, I could return the question, because he can’t be surrounded by people who are easily intimidated – they’re of no help to him.”

Being Mentored By Niharika

Another perk of winning “The Apprentice” is that Jessica will now work side by side with another successful businesswoman: ONE Championship’s Head Of Corporate Strategy, Niharika Singh.

Niharika played a vital role in “The Apprentice,” helping Chatri narrow down the group of 16 global candidates to just two in Jessica and Louie. Jessica will now get to learn from Niharika on a daily basis, and she can’t wait for the opportunity.

“Niharika is a powerhouse. She’s incredibly sharp. If you’re lucky enough to see her thought process, you’ll realize she’s flying way faster than most of us,” Jessica says.

“In a few years, she’s earned the respect of all of ONE Championship, but particularly of Chatri, and she’s still on an upward trajectory. I just hope that I get to absorb some of her IP, some of her leadership skills, some of her ability to communicate in such a concise and eloquent manner.

“She’s also an incredibly playful, fun, jovial woman. Niharika doesn’t fall into the stereotype that society puts on hardworking and ambitious businesswomen who work really hard. It’s inspiring to me that I don’t need to strip myself of who I am to achieve what she’s achieved.”

“The Apprentice: ONE Championship Edition” was a tremendous test of character for Jessica. She had to beat out 15 other extremely talented candidates, including Louie, a strategic samurai in his own right.

But things won’t get any easier over the next twelve months, as she makes major changes in both her personal and professional life while fulfilling a role that was only a dream twelve weeks ago.

“During the show, I grew and changed so much that I can’t fathom who I’m going to be in a year’s time after learning under Chatri. I’m going to become a machine because he demands such a high level of excellence,” Jessica says.

“I hope to have absorbed a lot of his leadership skills, to have become of value to him and Niharika, and to have proven that I was the right person for the job.

“Not many companies have a mission of making the world a better place through real life heroes who ignite the world with hopes, dreams, strength, and inspiration. Being part of this mission ignites my heart.”