Stamp Fairtex and Julie Mezabarba will now top the bill at ONE: NEXTGEN, and the exciting clash of strikers is guaranteed to finish off the night with fireworks.

Here are the keys to victory for both athletes as they aim to reach the tournament final and then earn a shot at atomweight gold.

Mezabarba believes her footwork will be levels ahead of Stamp’s, and this will play a crucial role in fending off the Thai’s powerful striking.

The Brazilian has a slight height and reach advantage, but the way she controls the distance with movement is the key to picking off the Fairtex athlete from the outside.

Her background in kickboxing means that she’s an excellent outfighter – entering and exiting quickly in linear channels for both offense and defense.

Whereas Stamp is more likely to plant her feet and trade, Mezabarba moves well laterally, which can open up different angles of attack and help her steer clear of return fire.

The Rio de Janeiro native can also surprise Stamp with strikes from long range, using her Superman punches and skipping steps to quickly take up a lot of distance and launch attacks when the Thai star is not expecting them.

Some opponents would get frustrated when forced to fight at a less comfortable range, but Stamp’s extensive striking experience means she’s patient and will wait for the right time to attack.

The former ONE Atomweight Muay Thai and Kickboxing World Champion is relaxed on the feet with tight defense and does not need to force the action. She knows her chances to land will come, and she takes full advantage when they do.

Rather than rushing in, Stamp is comfortable working behind her jab and right kick from range.

Her hurtful right kicks to the body and legs could hinder Mezabarba’s movement and make her less mobile. From there, the Pattaya resident will have more opportunities to sit down on her powerful punches.

When those openings come, Stamp hits with volume. She averages more than 50 strikes per round, with almost 30 of those being significant. But the key to this success is a measured approach instead of a bullrush.

Stamp may be patient, but she still has to close the distance at some point, and Mezabarba is an accurate counterstriker who will have shots waiting for the Thai upon entry.

The Brazilian scored with a tight left hook multiple times in her debut win against Mei “V.V” Yamaguchi, and she looks to land a tight uppercut through the middle when opponents step in with overhands.

Mezabarba also has fast kicks that she can utilize if Stamp comes in punching. They don’t have the same kind of power as the Fairtex fighter’s kicks, but they’ll rack up some damage and make Stamp think twice about her route forward.

In a worst-case scenario where she can’t move or counter, the kickboxing black belt is not afraid to simply stand her ground and go punch-for-punch, and her right hand is powerful enough to gain her rival’s respect.

Citing a speed advantage and saying Stamp is “too slow,” Mezabarba clearly likes her chances to land first in any exchange.

Stamp has a great chin and is rarely shaken by punches. This will give her the confidence to march forward and try to tie up Mezabarba in her strong clinch game.

The specialist in “the art of eight limbs” has dominated all of her opponents in the clinch, and it’s unlikely that the Brazilian will be an exception.

Stamp has a very strong Muay Thai plum with double-collar ties. From there, she dominates her rivals by breaking their posture, off-balancing them, and then firing off hard knees to the body and head.

She’s scored multiple takedowns in mixed martial arts by ragdolling her opponents from the clinch, which adds another element to her offense.

Moreover, if her foes can break free – or if Stamp decides to let them out – the 23-year-old usually has an elbow or punch waiting for them, scoring with another telling blow before they’re in the clear. 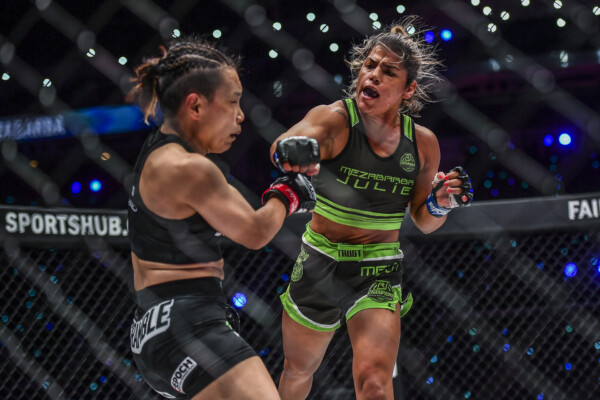 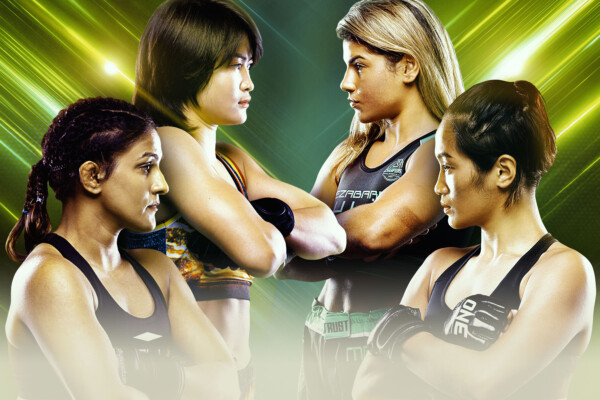 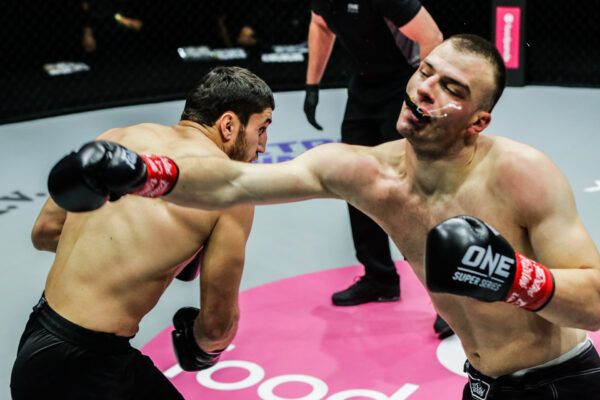