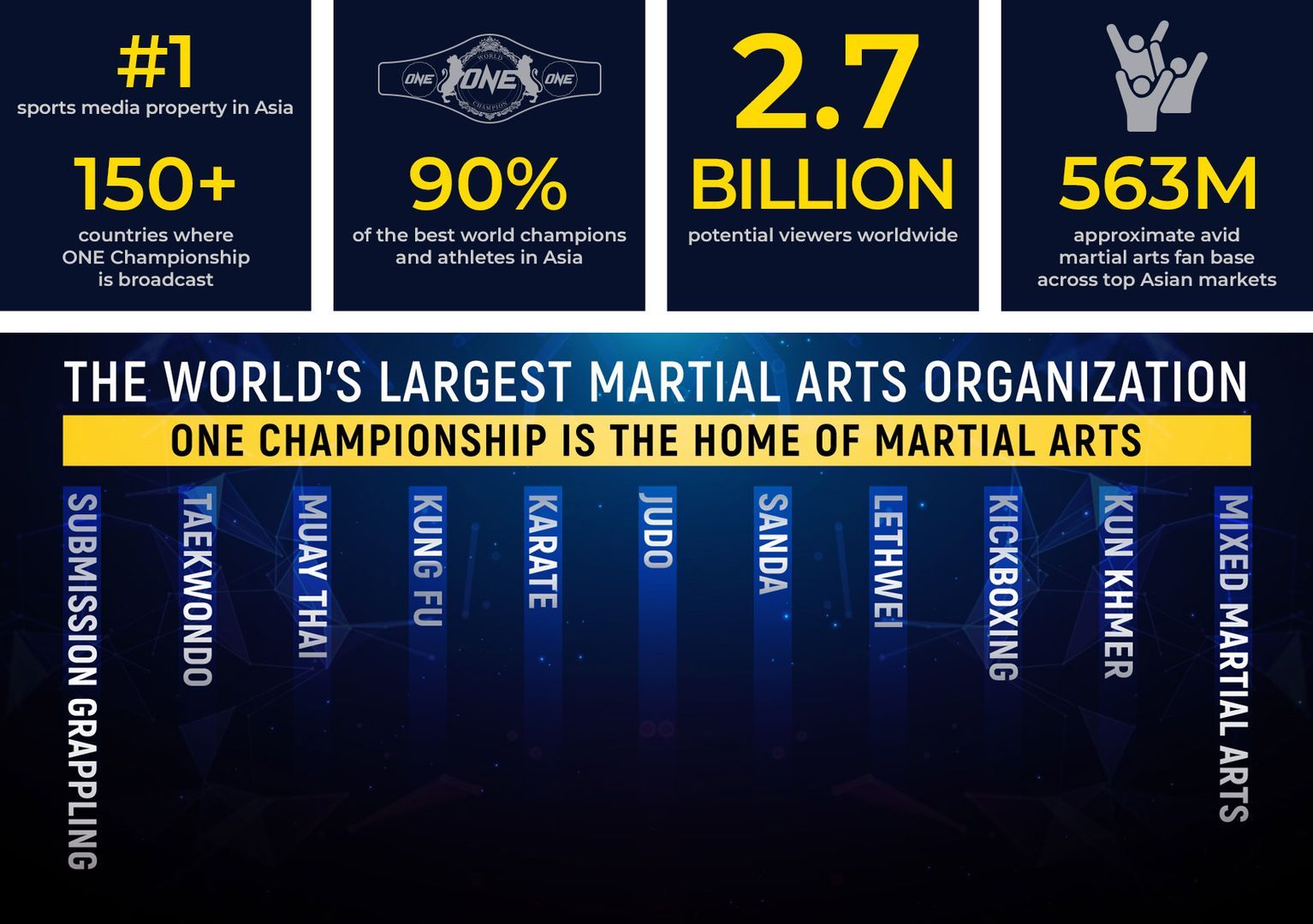 ONE Championship – The Home of Martial Arts

ONE Championship (ONE) is Asia’s largest global sports media property in history with a global broadcast to 150+ countries. As the world’s largest martial arts organization, ONE is a celebration of Asia’s greatest cultural treasure, and its deep-rooted Asian values of integrity, humility, honor, respect, courage, discipline, and compassion. Since Day 1, ONE Championship’s sacred mission has been to unleash real-life superheroes who elevate the world to dream more, do more, and be more in life.

ONE has achieved some of the highest TV ratings and social media engagement metrics across Asia with its unique brand of Asian values, world-class athletes, and world-class production. As the world’s biggest stage of martial arts, ONE features bouts across the full spectrum of martial arts such as Muay Thai, Kickboxing, Mixed Martial Arts, Karate, Silat, Sanda, Lethwei, Taekwondo, Submission Grappling, and more.

The ONE Athlete Roster is the greatest collection of the world’s most elite champion martial artists across various martial arts.

ONE events are held in the largest stadiums in the most iconic cities across Asia. ONE also has a coveted client roster of blue-chip Fortune 500 sponsors and advertisers, including the likes of Disney, Marvel, LG, Sony, Facebook, Haier, Kawasaki, L’Oreal, Casio, Bayer, Shiseido, Grab, Singtel, and more. With a focus on both martial arts and esports, ONE Championship is Asia’s largest global producer of live sports content for youth and millennials.

Our mission is to unleash real life superheroes who ignite the world with hope, dreams, inspiration and strength. The vast majority of the greatest World Champions in history have had to conquer unfathomable poverty, tremendous adversity, unspeakable tragedy, and impossible odds to achieve their dreams in life. We want to introduce these superheroes to the world so that they may inspire billions to dream more, do more, and be more in life. Through the power of media, the magic of storytelling, and the beauty of our heroes, we have the precious opportunity to celebrate values, ignite dreams, inspire nations, and change the world.

Asia has been the home of martial arts for 5,000 years, and it is time to unite as a continent behind our history, our culture, our tradition, and our values. Our dream is to unite the entire world by celebrating our continent’s greatest cultural treasure together in harmony.